NO MORE FAILURES AS USUAL 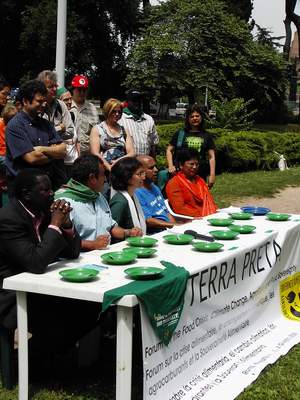 Rome, June 1, 2008.  At the eve of the High Level Conference on World Food Security in Rome, farmer, fisherfolk, indigenous peoples and nongovernmental organizations (NGO) have declared a People’s State of Emergency.

“Governments and intergovernmental organisations must immediately stop any policies, which lead to violations of the human right to food”, says Maryam Rahmanian of CENESTA, Iran.  “Free trade policies have seriously damaged the food system over time, leading to the food crisis that we’re facing today”. Parallel to the official conference, civil society organisations are holding a five day Forum to voice their demands on how to overcome the crisis.

In their statement, ‘No More Failures as Usual’, 800 organizations around the world call for a radical shift in agricultural policies building on the capacities of small scale farmers to feed themselves and the populations of their countries.  “We see the food emergency as a symptom of larger systemic failures – evictions of local communities, unfettered trade, massive climate change, the promotion of large scale agrofuel production, speculation and the corporate control of the food system”, explains Ndougou Fall of the West African farmers organisation ROPPA. “And we see a high risk that the UN agenda is being hijacked by large corporations who want to feed us the same solutions that have been failing for decades, like a so called New Green Revolution in Africa.”

“We reject the call of the World Bank and World Trade Organisation (WTO) for further liberalization of international trade”, Alberto Gomez from Mexico of the international peasant movement La Via Campesina adds. “These very policies have flooded our countries with cheap food, undermined our food sovereignty and devastated our abilities to produce food for ourselves. This has led us to complete dependence on the international markets. Now that prices are soaring, we are not able any more to purchase the food from outside.”

Thomas Kocherry an Indian representative of the World Forum of Fisher Peoples (WFFP) explains that the industrial food production model has also transformed fisheries. “Large scale commercial and aquaculture are dangerously close to wiping out the planet’s fisheries, he says.  Small scale fisheries not only put food on our plate, they enhance our fishstocks, protect our ecosystems, which safeguard us against disasters.” “We call on the governments gathering in Rome in the next days, to meet their human rights obligations and to listen to the proposals of the affected people themselves.” Sarojeni Rengam, Pesticide Action Network Asia Pacific, concludes. “Farmers themselves are agricultural experts and they must be in the driver seat of agricultural development. Farmers hold our future in their hands.”

See the civil society declaration in English, Spanish and French on
www.foodsovereignty.org/new/