Closing day at the solidarity village for a cool planet 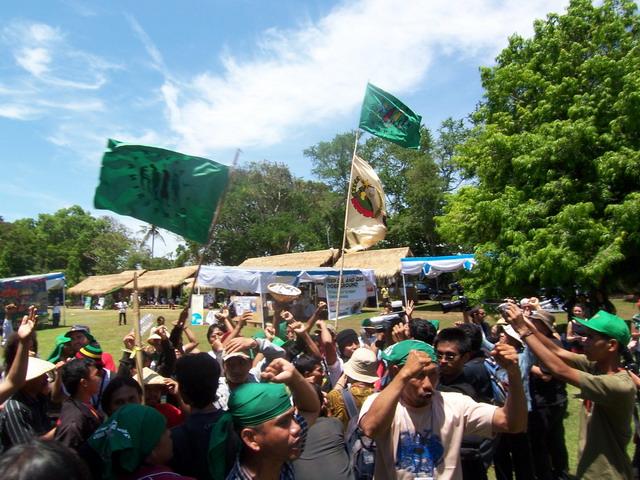 Bali, Indonesia (December 10, 2007) – Today, on international human rights day, peoples from all over the globe will gather for the closing session of the Solidarity Village for a Cool Planet, an initiative from different social organizations and movements fighting against ecological and social injustice and working for alternatives to the policies and practices that destroy livelihoods and the environment.

In the past four days affected communities, Indigenous Peoples, women and peasants have given testimony on their direct experiences of climate change, including floods, fires, drought, food insecurity, displacement and impoverishment.

Participants of the Village exposed the false solutions to climate change proposed by international financial institutions, governments and the big corporations, such as agro-fuels, offsetting, and carbon trading. Speakers highlighted the failure of carbon trading to reduce overall emissions and exposed the cynical way it has been used by polluters to profit from their pollution.  Given the poor record of market solutions, and the tremendous influence of corporations inside the negotiations, the participants are deeply concerned about the direction the Bali talks are taking.

People from across the planet – from the Pacific to the Atlantic – also spoke of real solutions, such as local energy sovereignty, replacing high carbon emitting industrial agriculture with small scale sustainable farming and food sovereignty, reducing the distance between working and living, radically changing current production and consumption patters, regaining control over resources, including forests, land, and water and reclaiming the peoples’ sovereignty.

Throughout the four days, speakers emphasized that climate change is the result of the over-consumption and destruction of fossil fuels and other natural resources, unsustainable production and consumption patters, excessive lifestyles, particularly in the North, and destructive policies such as trade liberalization and privatisation.

The unifying spirit of the Solidarity Village for a Cool Planet is the call for Climate Justice. By this we understand that countries and sectors that have contributed the most to the climate crisis — the rich countries and transnational corporations of the North — must pay the cost of ensuring that all peoples and future generations can live in a healthy and just world, respecting the ecological limits of the planet.

In Bali, we took another step towards building a global movement for climate justice.