Home » We are part of the solution to Global warming

From the 7th to the 9th of December, over 200 delegates from the Via Campesina, representing 20 countries from Africa, Asia, America and Europe, are holding events with social movements parallel to the COP 13th, United Nations Framework Convention on Climate Change (UNFCCC) in Denpasar, Bali. 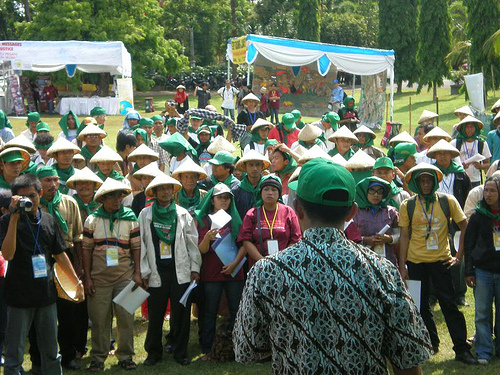 The representatives of the peasant and farmer organizations are holding various activities to address the problems that climate change present for the planet, and the role that transnational corporations, and neoliberal governments play against the development of a sustainable.

The government delegations at the official convention are dedicating themselves to the promotion of agrofuels and other forms of exploiting natural resources, all in the name of environmental protection and reduction of global warming.  This contradictory policy shared by many governments coincides with the transnational corporate agenda to use climate disaster as a new business opportunity.

Small farmers and peasant communities are among the first victims of climate change, and natural disasters. They also recognize themselves as part of the solution. The international peasant movement, Via Campesina, asserts that sustainable peasant agriculture and local food production will significantly reduce global warming while agribusiness deepens the crisis.

Henry Saragih, general coordinator of Via Campesina said, “We must combat global warming with solidarity and not with market based policies.”