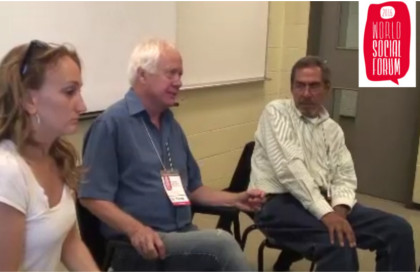 Several delegates comprising women, men, youth, and representing peasants and migrant agricultural and rural workers from several regions of La Via Campesina, are carrying messages of global solidarity and food sovereignty at the 2016 World Social Forum being held at Montreal, Canada.

Here are a few highlights from the sessions:

Carlos Marentes from La Via Campesina, Pat Mooney ETC group, Lise-Anne Leveille Union Paysanne-La Via Campesina, Eric Holt-Giménez Foodfirst, debating about corporate strategy to control the food system. “Agribusiness have increased their lobbying capacity in the United States by some two and a half fold, since Obama came into power”, says Pat Mooney. From Monsanto to Nestle, there is immense pressure on the food system to try and totally control it. With all the money and lobbying power corporations are finding success in many parts of the world.

Lise-Anne (from Union Paysanne-La Via Campesina) tells us that the government policies are often suiting corporate interests and young farmers are finding it difficult to do farming due to lack of access to land and resources. Carlos Marentes struck a positive note, when he called for food sovereignty as an alternative to the current corporate led food systems – which can keep the farm and the community healthy. In Quebec, for instance, the community supported agriculture and organic basket of vegetables is really growing in demand. Eric from Food First added that this is not just an issue of agriculture but also a question of the future of the planet. “We desperately need the peasant model of production”, he insists. “Food sovereignty is a social project and we must adopt it. But that also means that the country side has to be a good place to live. It is tough to live in the countryside now. This means we will have to direct our resources into the country side.”, he added.

Peasant Agriculture can feed the world and cool the planet

Dena Hoff from La Via Campesina North America, spoke at the session on “Climate Change – Crisis or Collapse?” held at Université du Québec à Montréal. In this video, she speaks about the movement’s efforts of setting up agroecology schools around the world. She recounts her own community’s negative and disastrous experience of living in a region where extractive industries liek Shell are dumping toxic wastes. She also speaks about the strain put on water resources by large industries operating in North Dakota. “The methane that goes up in the air lits up the sky and there is no night any more”, she says. “It is a problem caused by humans and it has to be solved by us- by changing our pattern of consumption, getting politically active, educating our neighbors and sor forth”, she adds

Some of the most fertile land and water resources in West Bank is controlled by Israel, says Youssef Nasser

Youssef Nasser, from the Union of Agricultural Committee in Palestine speaks about the dispossession and lack of access to land and water under the Israel regime. “Under different guises, land has been confiscated continuously since 1967, when the occupation started in West Bank”, he says. “These are often called a Military Zone or a Public land or a Nature Reserve – kept away and inaccessible to Palestine people….”

“…The biggest land grab was when they divided the West Bank into Area A, B & C..”, he adds. Union of Agricultural Committee is also a member of the international peasant movement La Via Campesina. “Where I come from, we are provided water once a week”, he says. Peasant farming was the backbone of West Bank region. Since occupation, the viability of peasant farming has been totally undermined, he adds.