Declaration of LVC Delegation to the 2016 World Social Forum

“We not only believe that another world is necessary, the members of La Vía Campesina are already building a better world.”

~ Carlos Marentes, co-coordinator of the North America Region of LVC 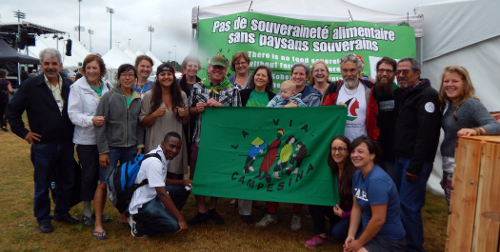 We were graciously hosted by the Union paysanne and reaffirmed our support for their struggle to end the syndicate-monopoly control of agriculture in Quebec, adding our voice to the demand that “There is no Food Sovereignty without Peasant sovereignty”.

La Via Campesina North America woman coordinator and vice-chair of the National Family Farm Coalition Dena Hoff stated: ”The whole region of La Via Campesina stands behind Union paysanne in its demands for recognition by the government of Quebec as the voice of the peasants struggling for food sovereignty.”

The LVC delegation participated enthusiastically in the opening march, in many workshops, panels and assemblies on the themes of food sovereignty, the right to food, post extractive societies, agro-ecology and peoples agrarian reform, and the future of the WSF, among many topics, together with allies like ETC Group, Grain, Climate Space, the Indigenous Environmental Network (IEN), Global Justice Now, USC Canada, SUCO, Why Hunger, Grassroots Global Justice Alliance, Global Forest Coalition, Focus on the Global South, Development and Peace, Inter-Pares, Vigilance OGM Québec, and others.

As Dena Hoff, stated: “The fight for food sovereignty will be won with a million grassroots efforts”.

At a time of deepening crises in the world, including massive suffering of migrants fleeing war, increasing poverty and hunger, extreme weather events, corporate driven land and resource grabs, the expansion and consolidation of big agribusiness and monocultures of feed and fuel plantations across the planet, we declare our firm commitment as LVC to the life-or-death struggle for food sovereignty, a peoples agrarian reform, seed and biodiversity sovereignty, the democratization of the food system and the strong defense of human rights.

We question the use of the concept of “agro-ecology” and climate buzzwords that are removed from the context of food sovereignty and used as a means of justifying an expansion of  “green washing” or for NGO fund raising.  We insist that agro-ecology signifies a validation of small and medium scale farming, peasant-led research and innovation, and it signifies the integration of traditional practices, and peasant and rural community control of our seeds.

Food sovereignty is the right of farmers and eaters to control their own food production, processing and distribution with culturally appropriate foods and equitable compensation and dignity for food providers. We assert that small-scale farming, fishing, herding, hunting and gathering are essential in the struggle to bring relief to climate change and continue feeding humanity.  We seek access to land for all, especially youth with the drive to feed their communities. We seek an end to the invasion of GMO seeds into our territories and we demand the right of farmers to continue to produce, save and share their own seeds.  We say  “No” to corporate agriculture and say “Yes” to the people of the land and to the peasant way.

LVC also publically criticized the Canadian Government because many leaders of important social movements were unable to attend the WSF as many hundreds of visas were denied, including the visas of two of the peasant leaders in our delegation.

We have also taken the opportunity provided by the WSF 2016 to express our solidarity with all the movements currently fighting against violence, dispossession, exclusion and the attacks against the democratic rights of people. We specially expressed our solidarity with the struggle of the Palestinian people against the oppression, and exploitation at the hands of Zionist Settler Colonialism, the struggle of our compañeras and compañeros of the Landless Movement of Brazil against the recent State Coup, the First Nations courageous struggle against the threats to the integrity of their land posed by tar-sand exploitation, pipelines and other destructive actions by capital, and the fight against the increasing violence against black people and therefore we fully support the Black Lives Matter Movement.