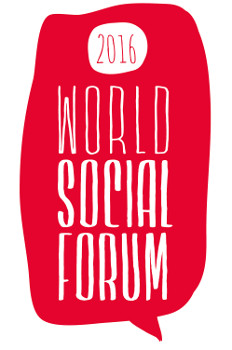 Several delegates comprising women, men, youth, and representing peasants and migrant agricultural and rural workers from several regions of La Via Campesina, will carry messages of global solidarity and food sovereignty at the 2016 World Social Forum this August. The Forum, which is a collective call for a sustainable and inclusive world, will be held in Montreal, Canada from the 9th to 14th.

La Via Campesina considers World Social Forum as an important space to build collective strengths of social movements worldwide – all of whom are fighting for social, economic, cultural and political justice.

In Montreal, our delegates will collectively organize and participate in sessions that would address the questions of agrarian reform, climate justice, peasant led research, alternatives to corporate controlled food systems, people’s sovereignty over corporate impunity, young peasants, the future of agriculture and many more.

New generation of trade treaties such as TTIP, TTP, CETA, RCEP, threatening food sovereignty and the rights of peasants and rural working people will be denounced through mobilizations in Quebec.  Such treaties include anti-people mechanisms such as the Investor State Dispute Settlement (ISDS)that not just override local and national judicial systems but also threat democracies. We will join other social movements and organisations worldwide in creating a collective strategy to counter and defeat such treaties aimed only at benefiting a few corporations.

La Via Campesina reaffirms its solidarity to social justice movements that demand full rights to indigenous peoples, to migrants and to people of different racial, ethnic and religious background. We collectively raise our voices against racial discrimination and against policies that deny migrants peasants and people, their right to equity and safety.

“In a context in which Québec farmers are being held hostage by an all-powerful union and an agricultural cartel, the Union Paysanne invites you to join it in celebrating and in making a renewed call for full freedom of association for farmers in Québec and in all parts of the world. We are calling for unity, for inclusion, for fraternity, and for farmers’ autonomy. There is no food sovereignty without farmers’s sovereignty! Globalize the struggle! Globalize hope!” Pierre-Olivier Brassard, young organic vegetable farmer, and administrator for Union Paysanne that is hosting the delegation.

For Media Queries and Spokespeople Availability

Notes to the editor:

The complete schedule of events that La Via Campesina would be part of are available here for download To follow updates and press releases from LVC during the events, visit www.viacampesina.org or follow us on www.facebook.com/viacampesinaofficial –

On Twitter, we will be publishing regular updates in English (@via_campesina) ; Spanish (via_campesinaSP) and French (@viacampesinaFR)