Home » Events » Every day should be international day of peasants’ struggles

Every day should be international day of peasants’ struggles 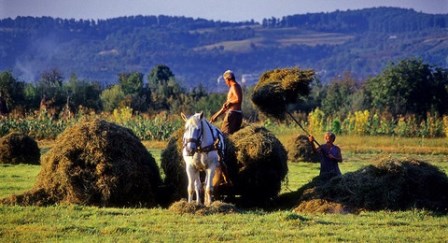 The 20th anniversary of the International Day of Peasants’ and Farmers’ Struggle was marked on Sunday – a date that highlights the persecution and violence suffered by peasants and farmers around the world.

It’s probably a date not many people have even heard of. Another one of those “international days of something really, really important” that passes by almost daily.

But consider this: Peasants and small farmers make up half of the world’s population and grow at least 70% of our food, using less than 30% of agricultural resources.

Without peasants and small farmers, society would not be able to survive, the wonderful diversity of food on people’s plates would be diminished, the pollution of our water and soil would increase, our countryside impoverished and there would be increasing hunger and poverty, fuelling regional and international instability.

It is hard for many people to believe that despite the crucial role of peasant farmers, so many face daily persecution.

It has been 20 years since 19 peasant men and women were murdered by security forces in Brazil’s northern state of Para whilst demonstrating for agrarian reform. The victims were part of a demonstration of 1,500 landless men and women calling for the federal appropriation of a private ranch, when 150 military police encircled and shot at the crowd.

Since then we have remembered 17 April and used it to commemorate the struggles carried out by peasant farmers, indigenous populations, fisher-folk and landless people against corporate interests, whether agribusiness, logging, mining, big dams or other mega-development projects. Sadly, despite 20 years of history, the persecution and violence perpetrated against peasants continues.

Only in the last month we have witnessed the killing of several peasant and indigenous leaders. At the beginning of March, Honduran environmental and human rights activist Berta Caceres, who rallied her fellow indigenous Lenca people against the Agua Zarca Dam, was murdered in her home. Her murder was one among 14 this year in Honduras. In the last six weeks six peasant community leaders have been assassinated in Colombia. And just two weeks ago in Brazil, two members of the country’s landless movement (MST) were murdered.

Closer to home in Europe, farming communities have also come under attack and had their lives destroyed by land grabbing.

In Spain, the main organisation demanding land reform, the Field Workers Union of Andalusia (SOC-Sat) is continuously pursued by the authorities. Already subjected to €1 million in fines and with 650 of its members currently indicted, an emblematic leader of the organisation, Andres Bolano was sent to prison last week for participating in a demonstration against agribusiness in the region.

Whereas in Germany a total of nearly 1.3 million holdings in 1967 shrunk to just 299,100 farms by 2010, as formerly state-owned land and the deregulation of the land market have favoured big investors. At this pace, in 20 years, 40% of mostly small and medium German farmers will be gone.

Land is being grabbed for a wide array of reasons in Europe: from urban or tourism industry developments including golf, ski and sea resorts, to mining projects and large-scale agricultural businesses. In countries like Bulgaria and Hungary, political clientelism has resulted in vast amounts of land going to large landlords and oligarchs, a reality aggravated by the large-scale production by foreign companies of corn and rape seed, thus sending many farmers to bankruptcy. The rush for land in these countries has also given rise to a new class of speculators and brokers.

A symbolic example of this struggle in France is the long conflict between the community of Notre Dames des Landes and the world’s largest private construction company, Vinci, for 1,200 hectares of agricultural land – the latter hoping to turn this into an airport.

Cases like this underscore how across Europe, the private sector is predominantly benefiting from land-leasing tenders. In Italy, 4.5 million hectares of land are concentrated in the hands of 19,000 private companies or farms, and in Romania millions of hectares of peasant farmland are being grabbed by large companies, with far reaching consequences.

It is this issue of acute conflict around land that we are highlighting during this year’s International Day of Peasant’s Struggle. In Europe and around the world the dispossession of communities from the land they cultivate is severely undermining our food sovereignty and opening the door to poverty and hunger.

We are living in two parallel worlds. The majority of the global population are producing food sustainably on small scale farms, providing for their families and local and regional markets. On the other side, we have vast corporations, supported by many governments, intent on industrialising, globalising and controlling more of the resources, land and the food chain, regardless of whether it destroys ecosystems, pollutes our countryside, produces unhealthy societies, creates massive inequalities or forces people off their land.

And this is why on 17 April we should all stand together – farmers, growers, citizens and activists – behind those threatened for wanting to stay on their land and grow food for themselves and others. We should use this day to make it clear that we will not tolerate corporations or governments that persecute peasant or small farmers.

Instead we should wrestle back our right to real food, a vibrant countryside and peasants’ rights to farm and manage the land sustainably. This would be massively positive to society – providing safer and more sustainable rural communities, diverse and appropriate food, and resilient local economies and blooming nature.

But why do this only on 17 April? Why not honour the people defending their land and producing our food every day – through the way we eat, what we buy, our political actions and who we vote for?

By Adrian Bebb and Ramona Duminicioiu*

*Adrian Bebb is senior food campaigner at Friends of the Earth Europe. Ramona Duminicioiu is a Romanian peasant farmer and coordination committee member of the European Coordination Via Campesina.