Home » Events » Tunis, 2013: La Via Campesina in solidarity with the aspirations of the Maghreb and Makrech people

Tunis, 2013: La Via Campesina in solidarity with the aspirations of the Maghreb and Makrech people 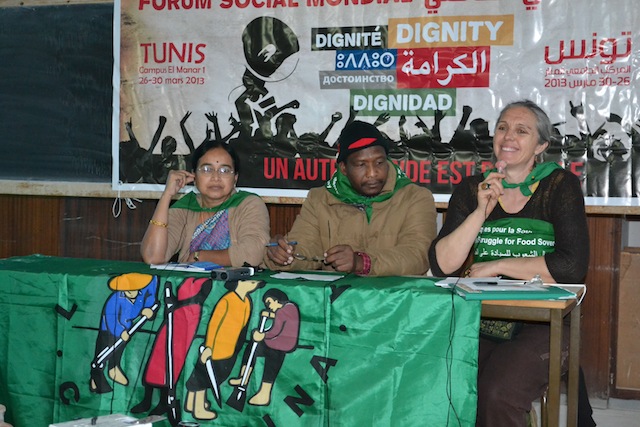 The global peasants and food sovereignty movement -La Via Campesina organized a press conference on the 27th March, at the Media center in the El Manar university at the inaugural day of the World Social Forum in Tunis.

The speakers at the press conference were Josie Riffaud of the Confederacion Paysanne in France, Ibrahima Coulibaly of the Coordination Nationale de Organisations Paysannes of Mali, Nandini Jairam of the Karnataka State Farmers Association of India and Angel Strapazzon from the Indigenous and Peasants Movement (MNCI) of Argentina.

LVC has come to Tunis in a large delegation of more than 50 women and men peasants from around the world. “we come in solidarity with the aspirations of the Maghreb and Makrech people. We are here to start a dialogue about defending peasant agriculture. The majority of the worlds people are small peasants, but there is a corporate assault on their resources – land, seeds, markets and water. It is crucial for us to build unity between peasants around the world and defend peasant agriculture to feed the world and provide dignified livelihoods,” said Josie Riffaud.

“Agribusiness and transnational corporations are a major threat to the world. They consume too many resources. They control the best land, and are grabbing even more land everywhere. Instead of producing food for people, they produce crops for export markets– bio-fuels for cars or animal feed for industrial meat factories. But farmers are also uniting globally and we will defend our lands,” said Ibrahima Coulibaly of Mali, a country with a major ongoing corporate land grab.

Talking about their proposals to solve the food and climate crisis, Nandini Jairam a natural farmer from India said, “We are not just resisting the threats from capitalism, but we also have a positive agenda with concrete alternatives – food sovereignty and agro-ecology. LVC is taking agroecology very seriously, we are organizing ourselves and sharing the best practices of agroecology with each other. We have countless examples of successful farming models that don’t rely on expensive chemical inputs, and produce much more than inefficient monoculture of agribusiness. They also end farmers debt, the main cause behind a wave of farmers suicides in India. These are the real peoples solutions to the climate, food and job crisis. Governments need to help us to scale up our efforts”.

Angel Strappazon, who is closely monitoring land grab and soya mono-cultures in Argentina said, “governments are promoting false corporate solutions like GMOs to the climate crisis. GMO mono-cultures are dangerous for the planet and people, they consume massive amounts of chemical herbicides and weedicides that are made of fossil fuels. In South America entire communities have become ill from pesticide drift.They contaminate biodiversity, soils become barren in the long run, incapable of storing carbon.  How do we plan to feed the world with dead soils and lost biodiversity?”.

The farmers also challenged the free trade agenda of neo-liberal governments around the world. “Agribusiness is trying to enter our markets and dump their unsustainable mass produced food in our countries. They pull down local prices and push small producers out of business. Not only are they unsustainable, they also undercut our nation’s ability to feed ourselves,” said the peasants delegation.

La Via Campesina will be organizing several events at the World Social Forum. It is one of the main organizers of the Climate Space which aims to re-assess the climate justice struggle. They will also co organize several panels on migration, women, peasant seeds and land grabbing among others.

LVC today is one of the most important and possibly largest social movements in the world. It unites small and medium farmers, landless people, women farmers, indigenous people, migrants and agricultural workers from around the world to promote food sovereignty.

LVC will turn 20 this year. On its 20th anniversary global conference in Jakarta in June 2013, it will expand to new regions and bring in even more members to join its current 150 local and national organizations in more than 70 countries from Africa, Asia, Europe and the Americas.

For a copy of the press kit and for more information on LVC at the WSF please contact:

Our new TV channel! Watch TV Via Campesina for short interesting clips of the WSF : http://tv.viacampesina.org