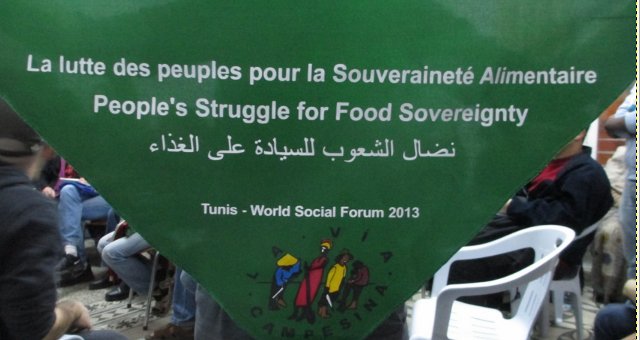 To the members of the media,

You are cordially invited to a press conference of the global peasants and food sovereignty movement -La Via Campesina on the occasion of the inauguration of the World Social Forum in Tunis.

La Via Campesina is one of the most important social movements in the world putting forward the voice of small farmers and agrarian peoples to defend peasants agriculture and end hunger. It brings together millions of peasants, small and medium-size farmers, landless people, women farmers, indigenous people, migrants and agricultural workers from around the world. It defends small-scale sustainable agriculture as a way to promote social justice and dignity. It strongly opposes corporate driven agriculture and transnational companies that are destroying people and nature.

La Via Campesina comprises about 150 local and national organizations in 70 countries from Africa, Asia, Europe and the Americas. Altogether, it represents more than 200 million farmers.

LVC has come to Tunis in a large delegation of women and men peasants from around the world who come in solidarity with the aspirations of the people in the Maghreb and Makrech region. They come here with their long experience of a diversity of struggles from around the world. They will put forward and dialogue about their positive agenda and movement to solve the food and climate crisis faced by the world.

The speakers at the press conference will be Jossie Riffaud of the Confederacion Paysanne in France, Ibrahima Coulibaly of the Coordination Nationale de Organisations Paysannes of Mali, Nandini Jairam of the Karnataka State Farmers Association of India and Angel Strapazzon from the Indigenous and Peasants Movement (MNCI) of Argentina.