Home » Events » Tunis 2013: If we rely on corporate seed, we lose food sovereignty

Tunis 2013: If we rely on corporate seed, we lose food sovereignty 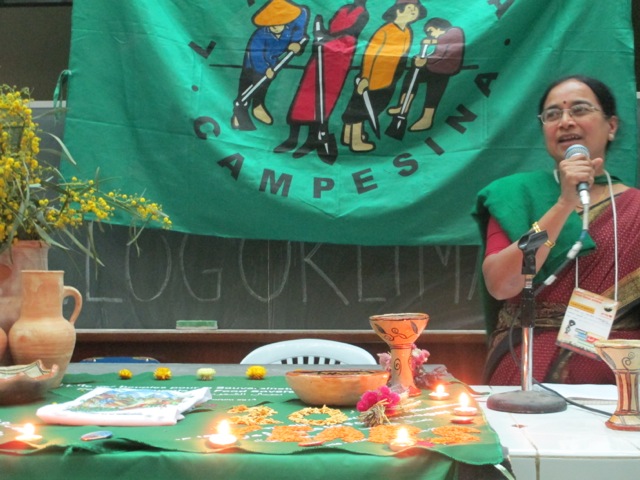 It has become crucial to defend seeds. In the past 20 or 30 years, what was once seen as normal – peasant farmers growing, selecting, saving and exchanging seeds – has come under attack from corporations seeking to control and commodify the very basis of agriculture.

This was the subject of the session at the World Social Forum in Tunis on Peasant Seeds jointly organized on March 28, 2013 by La Vía Campesina, GRAIN and the ETC Group.

There are four pillars of agriculture, says Nandini Jairam, a member of La Vía Campesina and a peasant farmer from Karnataka, India, “these are soil, water, seeds, and peasants.”

“A seed is miraculous. A seed has life – you sow one and you reap hundreds. And the skilled knowledge of peasant farmers is equally important. It is knowledge transferred down through generations by farmers that guides the selection of the right seeds to plant and to save. Farmers in India know how to preserve seed for two or three years without using pesticides.  And they barter seeds; they give them freely to each other, returning a part of the harvest.”

“It’s peasant seed that feeds us,” said Via Campesina’s Guy Kastler from France.  “And this is a catastrophe for companies.”

Corporations want farmers to buy industrial seeds – and the fertiliser and pesticides necessary to grow them. So they need to prevent peasants from continuing to develop, produce and exchange their own seeds.

Now the world is heading into a climate crisis. By 2070, says ETC Group’s Pat Mooney, we’ll be facing growing conditions that have not been seen before in the 10,000 year history of agriculture.

“But in the past 50 years, peasant agriculture has donated 2.1 million varieties of 7,000 crops to gene banks around the world. In the same time, seed companies have contributed just 80,000 varieties.”

And the contributions of peasant farmers are vastly superior, says Via Campesina’s Kastler. “A plant is a living being. It adapts to where it grows, and peasants select them carefully according to their needs.”

Industrial seeds are selected to work in uniform conditions, they are not adapted to local realities; they’re produced in laboratories and grown in test plots with chemical fertilisers.

“Away from the test plots, in farmers’ different fields, these seeds won’t grow without machines and fertiliser. The plants get sick, then you have to look after them with insecticides, fungicides, pesticides – poisons. Industrial agriculture is a science – a science of death,” says Kastler.

The world’s top six agribusiness companies are focusing their research on just a dozen crops. “They are putting the future of the world’s food supply into 12 crops. That’s no way to ensure the future,” Mooney says.

Despite the vastly greater resources available to industrial agriculture, peasants grow 70 percent of the world’s food.

“The industrial farming system has put peasant agriculture at risk. Do we trust industrial agriculture to save us, or should we instead assume that it is peasant systems have the resilience and creativity to answer the crisis?” said Mooney.

Agribusiness exists not to feed people, but to create and dominate/sustain markets.

The flagship “Alliance for a Green Revolution in Africa” (AGRA) is a clear illustration. A huge project, backed by the Gates Foundation and others, it claims its intent is to help small farmers produce more, says GRAIN’s Henk Hobbelink.

But AGRA is not driven by the needs of African farmers. It is focused on commercial farming, with agro-dealers at the heart of a strategy to transform into small farmers into businessmen, operating in a globalised market of corporate seed, fertiliser and distribution.

Crucial to the vision behind AGRA are commercially-owned seeds, such as GMOs.

“But GMOs don’t feed the world, they throw farmers off their land,” said Hobbelink. Ninety percent of GMO crops are maize, soya, canola and cotton, destined for textiles, animal feed and agrofuels.

GMOs are said to produce higher yields – but the evidence is that the opposite is true. The more seed has been manipulated, the more difficult it is to sustain high yields.

GMOS are also promoted as reducing the use of toxic agrochemicals – the evidence again points the opposite way, towards increased use. In Argentina, use of fertilisers and pesticides as increased 20-fold along with the growing use of genetically-modified crops.

What is the alternative?

First, says Kastler, peasants, locally, collectively, should save their own seed and organise themselves to select and safeguard them. “They must be autonomous in terms of seed.”

The aim should not be to create a global market. The sharing of seed is also the sharing of knowledge between peasants.

Second, we must fight against the laws that are stripping peasants of their rights regarding seed.

Third, we must stop GMOs: we must prevent their cultivation and resist and overturn laws that allow their expanded use.

Peasants must be present as equals in the debate over seeds. Peasants must secure recognition of the right to reproduce seed, to exchange seed, and to take an equal part in decision-making over the food system.