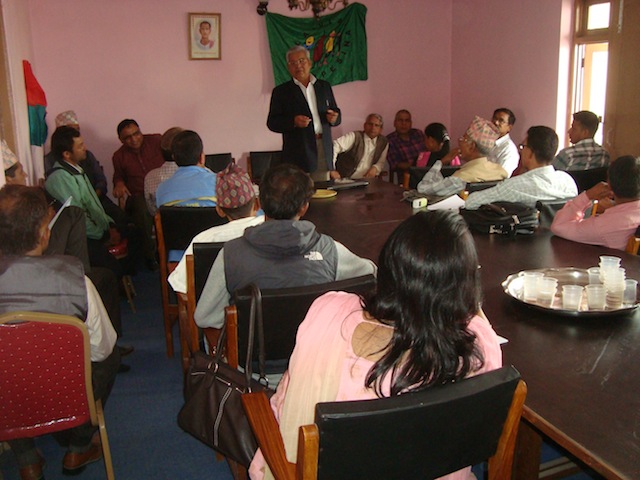 On April 17, 2013, All Nepal Peasants’ Federation (ANPFa), member of international peasant movement (La Via Campesina) organized a special program on the occasion of Global Day of Peasant Struggle. An interaction program was organized in Headquarter of ANPFa in Kathmandu to mark the day and pay tributes to all late Martyrs who sacrificed their life defending peasants’ rights. April 17 is the International Day of Peasant Struggle, commemorating the massacre of 19 peasants struggling for land and justice in Brazil in 1996. Every year on that day actions take place around the world in defence of peasants and small-scale farmers struggling for their rights. Member of La via Campesina around the world Mark this special day organizing various program in memory of the Martyrs.

Com. Hari Prasad Parajuli, welcomed all the participants and briefly introduced the rationale of program. He also highlighted the role of Martyrs at local and global level to guarantee the peasant rights. Com. Balram Banskota highlighted the objectives of this program and role of La Via Campesina for the internationalization of peasant movement. He also shared the history and evolution of global peasant struggle. Similarly, Dr. Keshab Khadka speaking on WTO and agriculture highlighted the role of via campesina against the WTO and need of vibrant struggle during the next WTO ministerial in Bali Indonesia scheduled to be held December this year.

Com. Bamdev Gautam discussed the growing peasants’ movement in the world and claimed that peasants are the main actor of change at present and has the responsibility to accommodate and consolidate other social movements to establish socialism of the 21st century. ANPFa Chairperson Bamdev Gautam also explained the national and international context and direction of international peasant movement and highlighted that peasant movement is growing as the working class movement who represent more than 80 % of the global population. He further said, ‘WTO and MNCs/TNCs are the enemies of small peasant agriculture that is why we are resisting it’. We should be united against the destruction of natural resources especially the grabbing of land, Mr. Gautam urged. Mr. Gautam also attracted the attention of peasant leaders to mobilize the grassroots movement. Com. Sarada Prasad Subedi formally wrapped up the program with his concluding remarks.