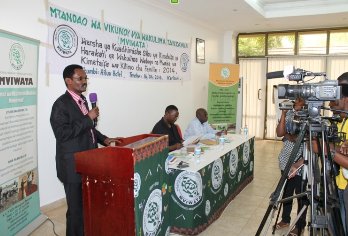 (Mororgoro, April 17, 2014 ) Ahead commemoration of the International Day of Peasants’ Struggle, the National Network of Farmers in Tanzania (MVIWATA) organised a workshop on 16th March, 2014 in Mororgoro town, attended by 70 participants from different cadres. These categories include farmers from different 9 regions of Tanzania mainland whose villages were affected by large scale farming, Government officials, MVIWATA Partners, academicians/researchers  and members of the press.

Speaking on to why the organisation was marking the Day,  MVIWATA Executive Director Mr. Stephen Ruvuga elaborated that the Peasants Day meant a lot to Tanzanian’s smallholder farmers due to the fact that they were not an exception to land rights tyranny.

“It is the day which we remember the killing of 19 Brazilian farmers who died when fighting for their rights, and we as institute advocating for small scale farmers rights we decided to commemorate this day to send our message to the government that we are really concerned with the existing challenges that small producers in the country still have to encounter.”

He explained that small holder farmers were deeply concerned with the direction that the government was taking to embracing large scale or foreign investors at the expense of indigenous small holder farmers, the scenario which has rendered the later group landless and helpless in the own country.

The day has been celebrated by MVIWATA at least twice since it became remembers of La Via Campesina by convening forums that engagement members in debates and discussions on pertinent issues such as land rights and agricultural policies.

During the one-day workshop, experts launched research  that have been conducted by MVIWATA, namely; Research on impact of bio-fuel investments in Tanzania, Research on impact of large scale farming on land security of smallholder producers and to debate and state the expectation of farmers in the on-going process of constitutional writing.

Participants, mostly small producers proposed a fresh clause on land to be incorporated in the second Draft Constitution to end mounting conflicts mostly pitying farmers and herders as well as farmers.

Earlier , the MVIWATA Chairman Mr. Habibu Simbamkuti, welcoming the guest of honor said that as small holder farmers in the country, they were really desperate due to the escalating land conflicts and insecurity in their production areas caused by fights amongst farmers and livestock herders.

He said, the existing land conflicts, have been caused by the government decision to allocate huge chunk of land to investors and leaving smallholder producers fighting for the remaining small and non-fertile pieces of land.

He also insisted the government leaders to remove barriers which hinder small scale producers not to reach their goals such us the absence of attractive market for their produce, late supply of subsides and existence of large amount of levy to what they produce.

The workshop was not only used  to mark the International Peasants Day but to conjoin with the commemoration of the International Year of Family Farming (2014), the year which has been deliberately selected to treasure the value and contribution of the family farming in feeding the world and driving the engine of agricultural based economies most of which are in developing countries.

The Deputy Minister commended the efforts done by MVIWATA towards small scale producers that aim to sensitize them of the likely impact of policy and strategic options undertaken by the government.

In his speech, Mr Simbachawene said, “we have already started legal procedures to see how we can repossess vast areas of undeveloped farmland held by ‘investors’. Our aim is to give idle land to farmers who need it most.”

He went on to say that, despite the process, it would be better if investors owning huge undeveloped pieces of land to willfully surrender it to government authorities so as to enable more poorer farmers to access land for farming.

According to him, there are some land owners who misuse their rights of occupancy by sub-letting farms to smallholder farmers at exorbitant rates of fees. If this is effectively implemented, it will reduce land conflicts in the country, he said.

In the unveiled research reports showed that areas where have been invaded by the so called investors such as in Mbarali, Kilosa, Mvomero, Babati Kilwa, Bagamoyo and Kisarawe districts, little has been done to develop the areas, inappropriate compensation procedures occurred and numerous land conflicts rocked the areas.