Home » Events » 17th April: Hundreds of actions around the world to celebrate the International Day of Peasants’ Struggles

17th April: Hundreds of actions around the world to celebrate the International Day of Peasants’ Struggles 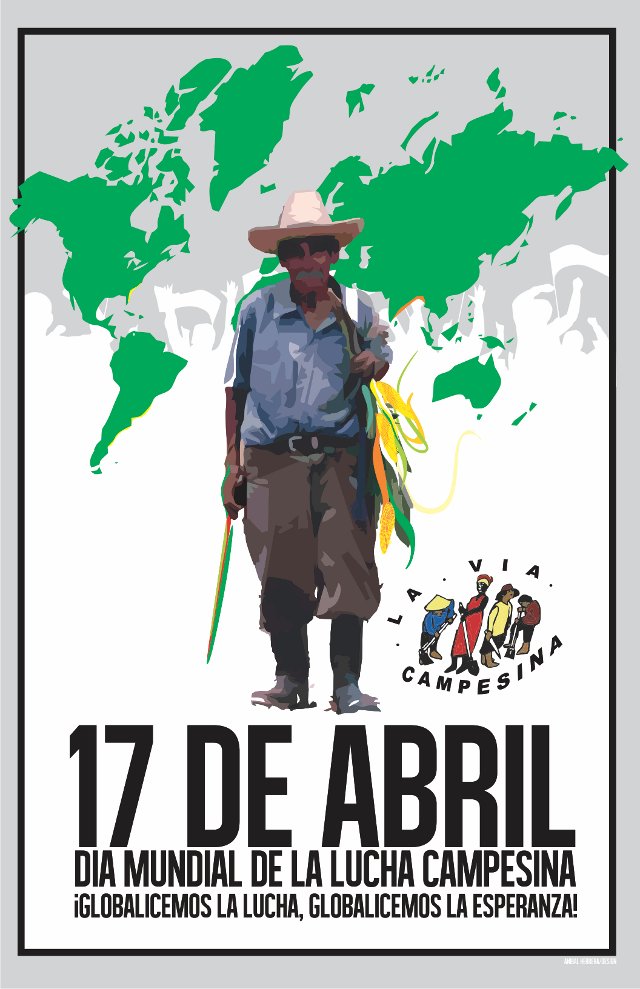 (Jakarta, 16th April 2013) Small-scale farmers and their allies are celebrating the International Day of Peasant’s Struggle tomorrow, 17th of April 2013, organizing hundreds of actions and demonstrations all over the globe. This event commemorates the massacre of 19 landless farmers demanding access to land and justice in 1996 in Brazil (1).

A full list of actions, ranging from university lectures and workshops to the occupation of land and government institutions is available on the website www.viacampesina.org. A map of actions will also be updated on a daily basis.

The international farmers’ movement La Via Campesina is mobilizing this year by continuing to oppose the current international offensive by some States and large corporations to grab land from farmers, women and men, who have been cultivating it for centuries. We are also opposing the commercialization of nature and the Commons, which is something that is leading to a massive dispossession of people who are simply living on the land. Farmers, be they men or women are particularly affected.

This day of day action is taking place in the year when La Via Campesina’s is celebrating its 20th anniversary. To launch the next 20 years of struggle, we are calling for a massive  day of mobilization on 17th April, to reclaim our food systems that are being increasingly occupied by transnational capital. It is also happening few months before LVC convenes its 6th International Conference that will be held in June, in Jakarta Indonesia.

Tomorrow, Farmers organizations will occupy the Ministry for Agriculture in Dominican Republic, to oppose the mining industry and will march and occupy land in Bahia, Brazil, as well as organize a public demonstration in Portugal. In Mozambique, the National Union of Farmers, UNAC, is organizing a conference on land and seeds in Mozambique. In Europe, the European Coordination of Via Campesina (ECVC) is joining this celebration and organizing, a European conference, open to the public, on 17th April, in the framework of its General Assembly. The event is co-organized by its Spanish member COAG (from the Canary Islands) and will be held in Fuerteventura.

According to Chavannes Jean-Baptiste, member of the coordination committee of La Via Campesina and representative of the Caribbean region, “land grabbing is a criminal act against peasants and indigenous peoples in the whole world.  In Haiti, we consider it to be a new kind of colonization. On the 17th of April 2013, all farmers’ organizations will mobilize right across the planet to say NO to this scourge.”

(1) On April 17th 1996, in the Amazonian state of Pará, at Eldorado dos Carajás, the state military police massacred peasants organized in the Movement of Landless Rural Workers (MST), killing 19 individuals. That day, 1500 women and men organized in the MST occupied and blocked the BR-150 highway in Eldorado dos Carajás, with the aim of bringing pressure to bear on the State and Federal governments to implement agrarian reform. At about 4pm, 155 state military police from two brigades surrounded the MST on the highway, firing tear-gas, live ammunition and machine guns. In addition to the 19 MST killed during the massacre, three more died later from injuries, and 69 people were wounded. State authorities, the police, the army and powerful local landowners were involved in the planning and executing of the massacre.