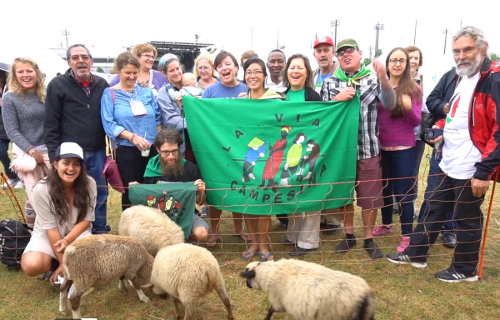 The World Social Forum, held this month in Montreal, brought together thousands of activists, organizations and social movements working to build a sustainable and inclusive world, to learn, strategize and share knowledge with each other.  With so many organizers, farmers, activists, students and change makers in one place, it was easy to see the collective strength of the movement and the potential for the type of transformative social change that our world needs.  The power of this potential was crystal clear at a briefing held by Quebec’s Union paysanne and La Via Campesina on the struggle of small-scale farmers in Quebec.

Union paysanne, or Peasant Union, was formed by a group of concerned farmers, consumers and activists that have been organizing in Quebec since 2001 to advocate for agricultural reform across the province. The goals of the movement – clearly articulated in their policy platform – include defending the rights of small scale farmers and organic production, advocating for access to land, food sovereignty and fair trade principles, and combating the corporate control of seeds, land and access to resources, including the refusal of GMOs and dependency on industrial agriculture. As Benoit Girouard, president of Union paysanne and a beekeeper and farmer explained, the main issue in Quebec is “the fight for access and control of our local resources for the local people.”

For years, Union paysanne members have been organizing to break the monopoly of the Union of Agricultural Producers (UPA) over the representation of farmers in Quebec. As Stephanie Wang and Laurence Barchichat, new farmers and coordinators of Union paysanne declared at the briefing, “Quebec cannot guarantee its food sovereignty without having a sovereign peasantry. The union monopoly of the UPA is a major obstacle to human-scale, respectful agriculture.”

The law in Quebec requires mandatory participation by small-scale farmers and producers in the UPA, which supports heavy regulations that make it hard for small farmers and producers to sell at markets and to have a viable, sustainable lifestyle in agriculture. According to Union paysanne, only 1% of the population in Quebec now works in agriculture; meanwhile 80% of agriculture land is not being cultivated because new, small-scale farmers and young farmers face restrictions to buy or access land. Most of the land is being shifted to large scale, corporate mono-culture facilities that are producing soy and canola.  These and other barriers make it difficult for small-scale farmers to survive.

Historically, Stephanie Wang later explained in a round table on the People’s Agrarian Reform held by WhyHunger and La Via Campesina at the Forum, Quebec had a high rate of self-sufficiency and was producing enough food to feed its people. But that has changed as the UPA has consolidated power, diminished food sovereignty – or the ability to produce, process and sell locally – and supported conditions for agriculture to become more industrialize, specialized and controlled by corporations who benefit with high profits.

The struggle has moved beyond Quebec with the international support of La Via Campesina, the world’s largest social movement representing 200 million peasant and workers around the globe.

“La Via Campesina stands behind Union paysanne and their demands,” explained Dena Hoff a co-coordinator of La Via Campesina North America and a Montana farmer and family farm activist. “It’s inconceivable that these farmers have to pay every year to a union that doesn’t represent their interests and actually works against their interests to benefit large corporations.”

Maxine Laplante, the vice president of Union paysanne and a farmer and agronomist, touched on the power of international solidarity: “Our problems aren’t different from the problems faced around the world. When we are connecting ideas, strategy, reflections and understanding – it is better for us.”

The members shared an optimism that with the support of delegates at the World Social Forum, international social movements like La Via Campesina and allies in government, change in policy and practice is not only possible but on the horizon. They are united in the understanding, as explained by Marielle De Roos, a member of La Via Campesina – Europe, that using local resources to support local needs – through food sovereignty, agroecology and food justice – is the most effective way to produce food and protect the environment, and that long-term small scale agriculture is the most sustainable way to produce food in Quebec and beyond.