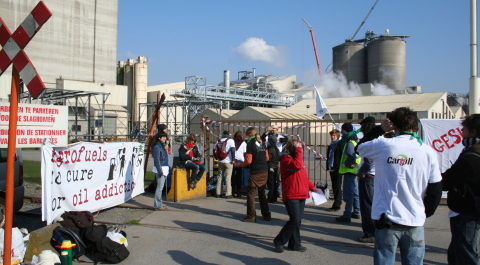 Belgium: Activists block the agrogiant Cargill for one day

Thursday April 17th, some 30 activists from seven different countries, calling themselves the Agrocrisis Group, blocked a Cargill company firm in the harbour of Ghent, Belgium . The action began around 6h30 in the morning and lasted until after 5 p.m. During all that time, not one truck with soy could enter or leave the firm. Some activists had locked themselves with pipes and bicycle chains at the gate, so it was impossible to open the entrance without brute force. The staff of the firm, scared of bad publicity, chose therefore to let the activists occupy the gate and asked the police not to intervene. 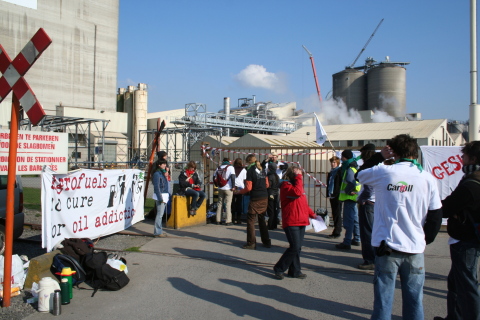 The action was completely non-violent, and got quite some media-coverage in mainstream flemish press (radio, tv, newspapers and internet). Choosing Cargill as a target to celebrate the international Day of the Campesino, was easy but also gives much space for different perspectives, some easy to understand for mainstream media, some more complex. Of course there is the topic of increasing world hunger because of the centralisation of control of the foodmarket by agrogiants like Cargill , but there is also the theme of gmo’s and pesticides for animal fodder, the expulsion of peasant farmers worldwide for the monoculture model and bigger profits, the costs of an agro-exportmodel (contrary to small scale distribution) and the greenwash of and investments in agrofuels.

On top of that, the action group wanted to put some spotlights on Round Table on Responsible Soy (RTRS) that is taking place on April 23d and 24th in Buenos Aires. Agrogiants like Cargill, the oil industry and big food processing companies want to agree on a so-called responsible soy certificate. They negiotiate this with ngo’s like WWF.

As the process is developing now, it seems like the RTRS is even going to label Monsanto’s Roundup Ready (gmo soy annex pesticide) as responsible. Like the previous years many social organisations and peasant movements are considering this as the ultimate attempt by agrobusiness. According to An Maeyens, press spokeswoman of the action group, “there are talks for years and after that a few minor adjustments will be done for a part of the production. Not a single hectare will be returned for small peasant production, but meanwhile it clears the image of the companies and is silencing critics.” Also the peasant movements are stating that large scale soy monocultures can never be sustainable.

The current EU agrofuel policy is only adding up to this impact.
You can still sign the international petition against the RTRS, until April 20th, on http://lasojamata.org/node/110.