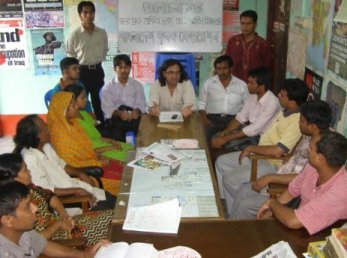 The meeting focused on a comprehensive and genuine agrarian reform as well as land reform. The speakers at the meeting accused the transnational corporations of destabilizing the food sovereignty worldwide for their utmost profit making hunger. On the contrary hunger belonging to poor people has become a common phenomenon in the entire world. They put emphasis for recovery measures for food sovereignty as answer to the crisis in the world around food crisis. The speakers commented that food is a basic human right which every body has got to have easy access to with adequacy and safety. They demanded to the government to take a quick initiative to distribute the Khasland (Fallow land) among the landless men and women in Bangladesh in order to capacitate the rural people. If the marginalized people in the rural areas be the owner of land they will be able to grow their own culturally appropriate food. They speakers also mentioned that the question of peasant’s human right has become crucial presently. Agriculture is not treated as a dignified profession. Peasants are the mostly neglected community in the globe.

The meeting maintained that there is famine like situation prevailing in Bangladesh at this moment. They demanded to the government for a short time (Up to next harvesting period) rationing system for the poor people living in the rural areas so that they can survive in such a crucial period. The speakers purported to the government for fair price for the peasant’s produces in the imminent rice harvesting seasons.

They also recommended that they government should not acquire any land for any purpose that can hamper agriculture, echo-system and biodiversity.

They accused Bangladesh government for not taking required steps for the cyclone affected people in the costal belt of the country. They also demanded from the meeting immediate unconditional release of the peasant leaders who were are arrested by the government at different times in Bangladesh. Finally they claimed a waiver of the agriculture loan for which peasantry of the country are suffering a lot for the long time.