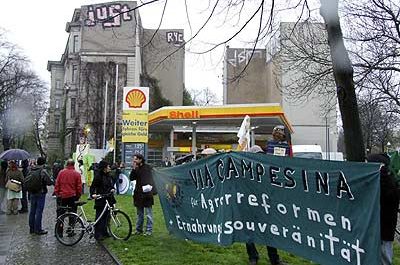 Before and on the action day different groups, collectives and NGOs participated in programs in and around Berlin.
Beside exhibitions, video screenings and 2 workshops, there were also the following two actions organized.
On the 13th of April around 60 people participated in a bicycle rally and an action on a proposed GMO- research field of the chemical giant BASF. There were potatoes buried in the field, so that is unlikely, that BASF can do the planned research on this field.
On the 17 of April – despite heavy rain – was an action in front of a petrol station with a banner drop, free distribution of organic bread, speeches and samba music. Afterwards was a rally to a symbolic square occupation on Heinrichplatz – with music, an exhibition and peoples food.  Around 70 people participated. 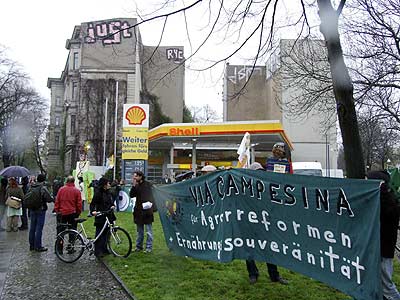