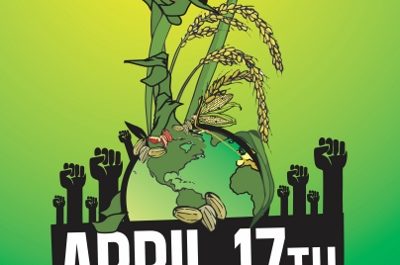 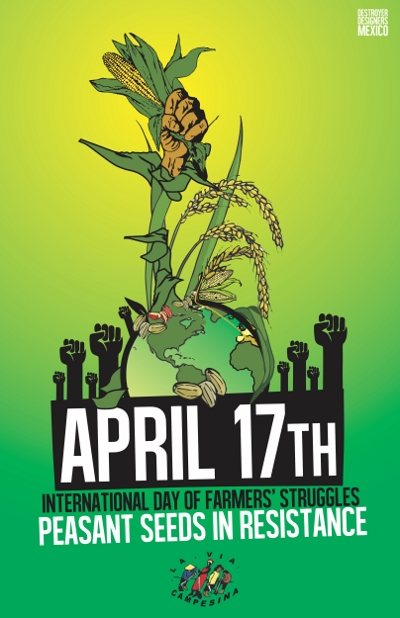 (Harare, April 16, 2014) This year millions of men and women farmers of the international peasant movement, La Vía Campesina, mobilize worldwide in favor of pasant seeds. Since April 17, 1996 (1) la Vía Campesina designated this day as a global day of action with allies and firends.

With more than 100 actions at a local and global level (see map) in all continents, la Via Campesina reasserts the importance of local struggles and at the same time underlines the need of a global resistance and organization between the cities and the rural areas. Actions such as land occupations, agroecological festivities, debates and seed exchanges will be carried out until the end of the month as part of these global days of action.

La Vía Campesina denounces laws and interests that seek to prohibit the use, exchange and access to peasant seeds that we consider a heritage of the people at the service of humanity, as well as food sovereignty as part of a commitment to end hunger in the world.

Historically, men and women farmers, and indigenous peoples have conserved and cared for seeds. La Vía Campesina says NO to all attempts to criminalize and make illegal our practices for caring for, producing and sharing seeds.

To defend our seeds means to defend the rights of men and women farmers. Seeds in hands of peasant farmers guarantee a dignified and autonomous future in agriculture.

In addition, on this 17 of April, la Vía Campesina will present its new documentary, “the Jakarta call”. This 38 minute video shows the exchanges, debates and discussions carried out during la Vía Campesina’s 6th international conference which took place in Indonesia in 2013. It shows the cultural diversity, values, solidarity and unity that come together in this political project in defense of a peasant food system in which seeds play a central role in the struggle for food sovereignty and in the construction of a more just society.

Please also refer to our publication: Our Seeds, Our Future and A Publication on April 17 and the struggle for seeds

(1) On April 17, 1996 in Brazil, military police forces assassinated 19 peasants in Eldorado dos Carajás (Pará). The farmers were members of the Movement of Rural Landless Workers (MST). On that day, 1500 men and women occupied and blocked the highway BR-150 in Eldorado dos Carajás with the goal of putting pressure on the state and federal government to carry out agrarian reform. Around 4PM 155 military police forces of the state surrounded the MST demonstrators, throwing tear gas and they fired guns at them. Therefore, in addition to the 19 massacred, three more died later and 69 were injured. State authorities, police, the army and landowners were responsible in the planning and execution of this massacre.