by Salena Tramel, Published on Thursday, April 17, 2014 by Common Dreams 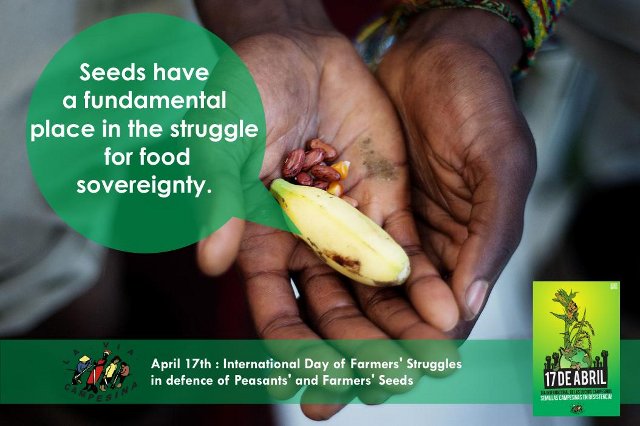 Sadly, yet not unlike the inception of many commemorative days, the events that inspired the first International Day of Peasant Struggle were soaked with blood. It was April 17, 1996, a calm day in the northern Brazilian municipality of Eldorado dos Carajás, where the country’s most renowned social movement, the Landless Worker’s Movement (MST) had organized a demonstration against the federal appropriation of a vacant ranch where nearly 3,000 rural working families were living and cultivating the land. The protest turned violent when the secretary of public security ordered police to clear the roadway – “at any cost”. The operation was costly indeed: nineteen people lost their lives in that event that would come to be known as the Eldorado dos Carajás massacre.

Word of the massacre ricocheted throughout the world, particularly north to Mexico where the international peasant movement known as Via Campesina was gathered for its second conference in Tlaxcala. Via Campesina was only three years in the making at the time, but had already achieved much. The movement boasts a unique global base of farmers, fishers, and pastoralists, connecting labor movements, women’s organizations, and a host of underrepresented and mostly rural members. The conference in Tlaxcala, Mexico would prove to be historic – it was there that Via Campesina solidified its groundbreaking framework of “food sovereignty” – redefining the fundamental right to food to the advantage of food-producing peasants themselves.

But when Via Campesina’s leaders and organizers learned of what had occurred in Brazil that fateful day, their world stood still. Anything that happened within MST struck a chord within Via Campesina – the two groups were intrinsically tied from the moment MST helped pen the international movement’s founding documents. Via Campesina simultaneously grieved the loss of its colleagues in Brazil and reflected on similar incidents of violence against peasant activists in Latin America and around the world. The movement quickly recognized a public awareness gap that it was convinced could be filled by education and advocacy by and for peasants. Via Campesina spared little time and declared April 17 an annual celebration of peasants everywhere in honor of those killed in Brazil.

Fast-forward, and Via Campesina has grown to 164 member organizations in 73 countries as it marks its 20th anniversary. Peasants today are still routinely sidelined and harassed – despite the fact that their work accounts for 70 percent of global food production. With that in mind, the International Day of Peasant Struggle continues to be one of the movement’s key days of organizing and action. This year, Via Campesina dedicates its day of action to the defense of seeds.

From the beginning, control over seeds has been at the top of Via Campesina’s list of critical issues. Its relevance has heightened as transnational corporations have tightened the grip on a world food system characterized by the commodification of basic resources. At present, just ten seed companies dominate 67 percent of the world’s seeds – with Monsanto and its patents controlling 23 percent of the global supply.

“Seeds for us signify the basis of food sovereignty because they determine how we cultivate the land, how we eat, and also reflect our cultures and tastes,” said Guy Kastler, a Via Campesina leader based in France. “Farmers face increasing criminalization when planting their native seeds, even though that practice has always been the foundation of agriculture,” he elaborated. Diverse member organizations within Via Campesina employ various tactics to preserve indigenous seeds, from local seed banking to international seed exchanges. In the same vein, its activists strongly protest the spread of GMOs, pushing the envelope of food system change and catalyzing actions far beyond Via Campesina’s original base.

The world’s largest – and perhaps most important – agrarian movement has realized many victories in just over two decades of existence. With its efforts around seeds – and additional work on complex issues ranging from land and water grabs to trade and migration, Via Campesina’s base is no less threatened now than it was in Brazil nearly 20 years ago. While some view peasant agriculture as a bygone livelihood, and powerful political and economic interests are out to replace it, Via Campesina is taking calculated measures to ensure that today’s peasantry does not slip quietly into the night.

Salena Tramel is a journalist and international policy and development consultant.