Press release of the Landworkers’ Alliance. 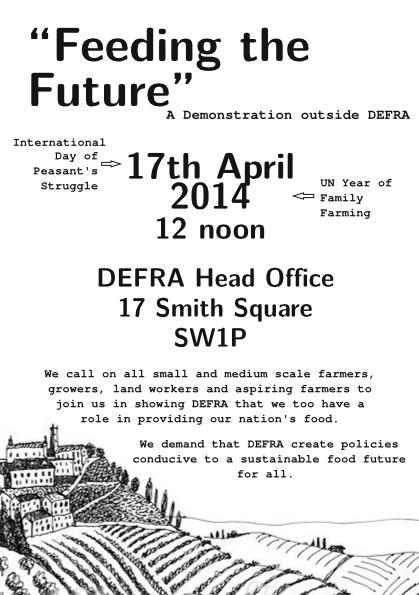 (London, March 26, 2014) The Landworkers’ Alliance (LWA) will be holding a demonstration outside the Head office of the Department for the Environment, Food and Rural Affairs (DEFRA), 17 Smith Square London, at 12.00pm on Thursday 17th April. The demonstration is part of Via Campesina’s international day of peasant’s struggle which will see co-ordinated actions taking place across more than seventy countries worldwide.

The LWA is a coalition of small-scale producer across the UK whose interests are not currently acknowledged or represented by DEFRA. Under the leadership of Owen Paterson over the past two years the Department has strengthened its support of large-scale industrial agriculture and further marginalized smaller producers in its efforts to promote “Sustainable Intensification” as the only solution to feeding the world. 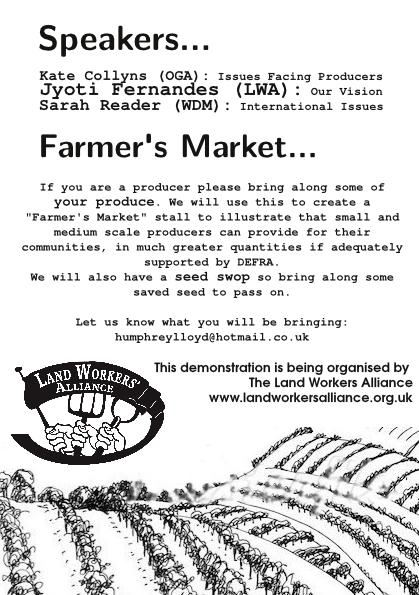 “DEFRA needs to recognise the role of small-scale producers in contributing to the national food economy, as well as the environmental and social services provided by these producers” says Rebecca Laughton from the LWA.  “As a matter of urgency we demand that DEFRA create policies conducive to a sustainable food future for all.”

The LWA is an official member of the international peasant farming movement La Via Campesina which represents 200 million small-scale producers around the world. We campaign for the rights of small-scale producers and lobby the UK government and European parliament for policies that support the infrastructure and markets central to our livelihoods.

In the UK: Number to be released