17th of April in Bangladesh 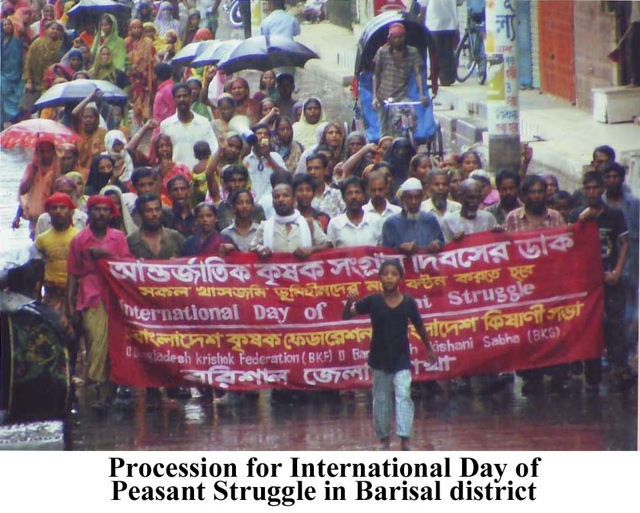 On 17 April 2009 Bangladesh Krishok Federation, Bangladesh Kishani Sabha and Bangladesh Adivasi Samity observed the International Day of Peasant Struggle at different districts in Bangladesh with strong spirit of struggle for the peasantry in the country.

In Narayangonj district there was a discussion meeting in which the speakers are of the opinion to resist the policy of the government to acquire or to lease out the agri-land to the so-called industrialists. They also said that there is a trend of ill-purpose from the side of the government to seize the land of peasants for Especial Economic Zone through which the common people in the country would not be benefited at all rather the Multinationals would be beneficiaries. The local elderly peasants told that they and their next generation would face indecent circumstances as the government already decided to build model town in the area. According to them the offspring of the peasants would be made slaves to the rich people who would be the model town dwellers. They raised the dignities and rights of the peasants that deserve serious attention at present global reality.

In Barisal district the peasants and landless people held a rally and brought out a big procession in order to observe the international day amidst a huge rainfall due to possible cyclone. In the rally leaders demanded distribution of Khasland (Government owned land) among the bona-fide landless families. The also asked the government to withdraw all the false and fabricated cases against peasants and landless leaders in the country. They expected that the local administration would play the role of co-operation to the landless otherwise the local influential would take the illegal advantages around the land.

In Borguna district a human chain is organized by the landless men and women, peasants and agricultural workers amidst heavy rainfall. In the human chain they demanded to the authority that all Khaslands in the country be distributed and settled among the deserving genuine landless men and women. They also called for unity, solidarity and co-operation among the peasants aiming to tackle any obstacle from the enemies.

In Kurigram district landless peasants and Adivasi (indigenous people) staged a demonstration demanding the distribution of British-abandoned-railway land and different water bodies among the landless people and fisher folks. They also claimed that they are being harassed by the local big landowners in different ways. Every now and then, they faced the attack from the unleashed body of local big landowners. They also encountered various false litigations filed by the influential.    Criticizing the policy of the government as regards local development they also asked it to reintroduce the very recent banned scheme of 100 days employment creation for agricultural workers.