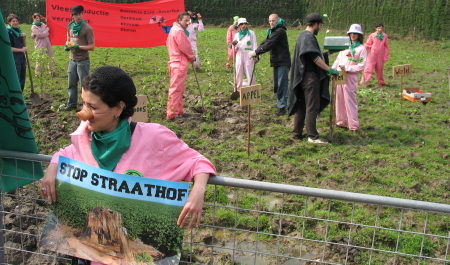 April 17 in The Netherlands: Actions to stop Straathofs mega pigstables 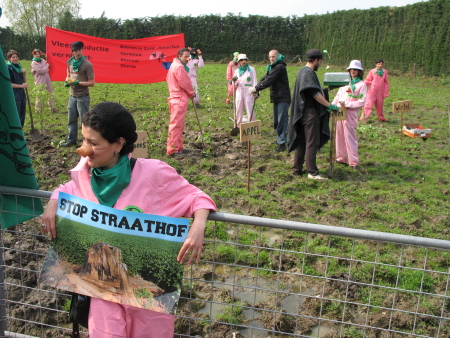 watch the video of the action

Friday April 17, 2009- 40 activists of the group ‘Stop Straathof’ made a vegetable garden on the terrain where agro-industrialist Straathof plans to expand one of his many pig farms. The action was a protest against the animal industry and accompanying soy production for animal feed, that causes a lot of suffering in South America.

The action started a little tense because the police was awaiting the acitivists. Via a back track the action group, dressed in pig and farmer suites, managed to reach the company after all. The digging and the planting of vegetables and fruit trees could take place.

Three employees were calmed and the local police turned out to dislike Straathof as well and let the activists do their thing. After the hard labour was done, the group found their way via Erichem to the town of Buren on the beats of the Rhythms of Resistance action sambaband, spreading flyers as they went. Rebelact’s play showed how big capital exploits animals and farmers the like.
At the local supermarket and primary school a small manifestation took place with tasty foods,music, and a photo exhibition about soy production and the animal industry. About everybody in Buren knows the pig farm of Straathof, knows the stench the company spreads and would see it disappear. The flyer that was handed out described the problems related to animal feed production and animal suffering, providing the locals with even more arguments against Straathof’s pig farms and meat production in general.

April 17 was particularly chosen for this action to take place because it is the International Day of Peasant Struggle, declared as such by Via Campesina, a worldwide network of peasant organisations.