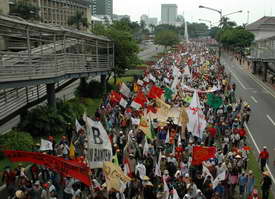 On May 17, the streets of Jakarta filled with thousands of peasants. More than tend thousand men, women and children from the remote villages of Java flocked to the city centre with their banners, songs and the sound of the drums to one of the largest protests for agrarian reform since the end of the “New Regime” in 1998. They were joined by workers, students, youth groups, urban poor, and other civil society representatives.

The Indonesian Federation of Peasant Unions (FSPI) and La Via Campesina initiated this mass mobilisation to protest against two major events in Jakarta critical to the direction of agrarian policy nationally and regionally.

Firstly, the Food and Agriculture Organisation (FAO) was holding its 28th Regional Conference for Asia and the Pacific in Jakarta. During the conference, farmers from all over Asia urged the FAO to comply with its goal to reduce hunger and poverty. On May 15, about 500 FSPI farmers protested in front of the conference venue to tell the FAO that food sovereignty, agrarian reform – and not free trade – were the key to reducing poverty in rural areas.

Yet streets were the only venue for farmers and peoples organisations to really express themselves. Civil society groups were denied the right to address the ministerial conference on May 18, after FAO director general Jacques Diouf reneged on his commitment to allow them to do so. The FAO regional conference concluded without hearing them. In the conference’s final declaration, the ministers reaffirmed their faith in trade liberalisation to alleviate poverty “in line with the spirit of the WTO Doha Development Agenda” – a position that La Via Campesina and other farmers’ movements have been opposing for years.

Land to the tiller!

Secondly, farmers in Indonesia are alarmed by the current move by the National Land Body (an institution directly under the presidency of the republic), to revise the Basic Agrarian Law (known as UUPA 1960). This law was developed in 1960 under the Soekarno government in order to transform the country’s unequal colonial social structure  into a more egalitarian one. At that time, land ownership was heavily concentrated in a few hands and the majority of the farmers were landless or almost landless.

Adopted under the pressure of the farmers’ movement, the law provides an important framework for agrarian reform in the country. It states that the ultimate control over land, water, sky and resources under, beneath and over the soil rests with the state and can only be utilised for people’s prosperity. It also recognises equality between women and men, the rights of indigenous people, as well as the principle that the land belongs to the tiller.

This law gave a valuable basis for land distribution and social justice, but its implementation was halted with the rise of the Soeharto dictatorship in 1967. Today, land distribution remains extremely unfair, creating massive malnutrition, poverty, unemployment and hunger in a very rich agricultural country. Currently, 70% of farmers control only 13% of the land, while 30% of farmers control fully 87% of farmland.

Even though the Basic Agrarian Law was never implemented, it has never been formally scraped and continues to be an important basis for land distribution. However, it is currently under threat with the Parliament due to debate a  revised law in July or August 2006. The current revision is inspired by the World Bank’s concept of “market led land reform”(1) : it focuses on the liberalisation of the land market (through land titling) and not on land distribution.

In the context of the FAO conference and the threat to the agrarian law, FSPI invited other social movements and NGOs in Indonesia to join forces for agrarian reform. They formed the People Coalition against Neo Imperialism to organise the mass mobilisation on May 17(2). The forming of this coalition is a meaningful step in uniting people’s movements because revisions of the UUPA 1960 had divided social movements in the recent past.

In 2001, the parliament adopted a decree on agrarian reform (3) opening the door to dismantling the Basic Agrarian Law. Some civil society organisations supported the decree, seeing it as a way to put agrarian reform back in the political agenda. But some other groups, such as FSPI, fiercely opposed it because they saw it as opening a “Pandora’s box” of neo-liberal policies. The decree states that the UUPA 1960 has to be revised and restricted to the issue of land management, while the other natural resources were henceforth to be regulated by new laws. Since the adoption of the decree, a series of new laws, policies, concessions and regulations were adopted or amended to promote a neo-liberal approach (e.g. the Basic Forestry Law, the Law of Foreign Investment, the Law of Mining and the Law of Water Resources). They are designed to attract foreign investment and to boost trade and exports of natural resources, while dismantling people’s rights

Hence, the May 17 mobilisation was politically significant for Indonesian social movements and NGOs because it is the first time since the controversy about the parliamentary decree that they campaign together against the revision of UUPA 1960. There is a agreement now across the various groups that any revision of the law would be dangerous as it could alter its philosophy.

On the protest day, the coalition issued a joint political platform asking for:

These were the demands that the peaceful and colourful march carried in the streets of Jakarta during the whole day. Protestors left from the Istiqlal mosque early morning and walked to the Presidential Palace. There, the president sent an official delegation (the minister of Agriculture, the chief of the National Land Body, the cabinet secretary and its spokesperson) to meet the farmers leaders. The official delegation told the protestors that they had “the same heart and mind” as the farmers, but that “even if power was in their hands, they could not use it alone”. The peasants replied that if no concrete step was taken towards genuine agrarian reform, they would organise more mass actions and land occupations in the future.

In front of the presidential palace, various people’s leaders addressed the crowd. Among them, a representative of the Korean Peasant League gave a brief message of solidarity to the Indonesian farmers. He was part of an international delegation of farmers organisation members of La Via Campesina who had come from 10 Asian countries to attend the FAO conference and the Peoples’ Conference on Rice and Food Sovereignty (14-18 May, Jakarta)(4).

The protesters then marched to a central circle (Bundaran Hotel Indonesia) to spread out information about agrarian reform among the public passing by. During the whole protest day, the streets of Jakarta resounded with many songs of hope and protest. Franky Sahilantua, a famous Indonesian pop singer renowned for his songs about the lives of farmers, migrants and workers, sang with the protestors . He has been singing for the Indonesian farmers movements since he accompanied FSPI to the anti-WTO protest in Hong Kong in December 2005.

The march then went to the Parliament building where representatives from various parties (5) addressed the farmers. From the top of a truck, they promised them to implement land reform, but farmers had heard it before. They shouted at the parliamentarians: “Don’t promise it, do it!” They also shouted: “Come to our village, and see for yourself how we live!”

The largest group in the protest was definitely Serikat Petani Pasunda (SPP), a farmers union from West Java and member of FSPI. 7500 SPP peasants had come to Jakarta in 120 buses, (6). After an exhausting day of protest under the sun, they spent the night in the city and left at dawn to return to their villages. That same day, SPP protestors from Ciamis (West Java) occupied 300 hectares of land belonging to a teak plantation. A sign that agrarian reform in Indonesia can not wait anymore.