Home » Declaration against the criminalisation, persecution and judicialization of the struggle for the defence of life, rights, land, water, seeds and mother earth 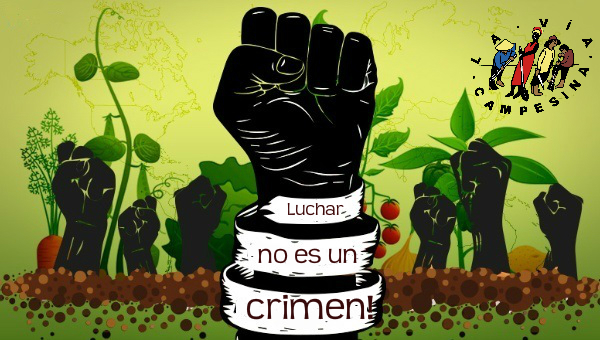 From 13 to 17 April 2016, in Marabá, Pará, Brazil, more than 130 delegates from 28 countries around the world were brought together as part of La Vía Campesina and allied movements, as part of the International Conference on Agrarian Reform, a symbol of the fight for freedom for men and women in the fields, the mangroves and on the sea. The aim of the conference was to draw up a much-needed proposal for Popular Agrarian Reform to override capitalist and neoliberal expansion.

At this time of struggle and resistance for peoples of the world, we debated the criminalisation, persecution and judicialization of the struggle for the defence of life, rights, land, water, seeds and mother earth, promoted by capitalist interests imposing political, economic, military and social terrorism. This all occurs with the consent of State Governments by means of their lethal projects such as extraction-based infrastructure projects, or capitalist ‘development’ (tourism, carbon markets, mining, hydroelectricity, monoculture, agribusiness, industrial agriculture and mariculture), as well as the militarisation of our lands. Depravation, social instability and repression are widespread as a result of systematic assassinations, massacres, forced disappearances, high rates of femicide, imprisonment and arbitrary detention, intimidation, harassment and threats, prosecution of leaders, forced migration and wars against ordinary people.

On top of this there is political instability with the purpose of maintaining an imbalance among populations over the world, as well as frequent coups on the US government’s radar, a state which begins by creating unstable, failed states, as is the case in Honduras, Guatemala, El Salvador, Paraguay, Ecuador, Bolivia, South Africa, and the current attempted coup against the Brazilian people and the systematic meddling in the Venezuelan process.

We see collusion between the State, private companies, corporations and elites who create a culture of impunity that allows perpetrators to escape unpunished.

Faced with this wave of unbridled criminalisation of those of us who defend water, land, mangroves, sea, territory and life, we denounce and call for the punishment of those responsible for thousands of assassinations of social leaders, we denounce the legal prosecution of thousands of campaigners, we call for the liberation of thousands of political prisoners, we denounce the extreme case of the assassination of Berta Cáceres, one of the most symbolic leaders in the fight against capital plundering and a campaigner for peace in Honduras. We urgently need an end to the criminalisation of the fight for land, mangroves and sea, and the social struggle.

Today, more than ever, we reaffirm that our fight is part of the defence of human rights and life. For life we give everything, for death we give nothing.

Throughout our lifelong struggle, not one moment of silence for our dead!