Home » BAFLF: Government must be prepared for the post subsidy era 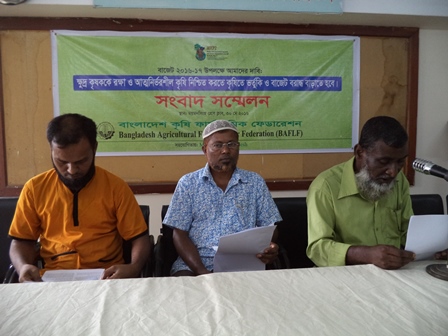 Bangladesh Agricultural Farm Labour Federation has termed the recent WTO treaty on subsidy withdrawal from agriculture as suicidal for the food security of Bangladesh. They were speaking from press conference held today in Mymensingh press club.  They said, the 10th Ministerial Conference of World Trade Organization (WTO) has decided to bring an end to agriculture subsidies. Developing countries will remove subsidies within 2023, Least Developed Countries (LDCs) and net food-importing countries will do that within 2030. It means countries like Bangladesh has to stop all its supports towards agriculture. It will lead Bangladesh may be to remove almost a full ministry called Ministry of Agriculture that is providing various extension supports to the agriculture sector.

Md. Anower Hossain, president of BINA Workers Association and CC member BAFLF presided over the press conference. On behalf of the BAFLF Sultan Ahmed placed some specific recommendations from the press conference, these are: (i) implementation of strong laws controlling commercialization of agricultural lands to save small farmers land and to refrain marginalized farmers from selling their lands, (ii) introduction of cooperative farming to save the small scale farmers, govt. incentives must be there to save the small scale farmers (iii) Establishment of dam in coastal areas must get priorities to save the coastal farmers from river erosion, flash flood and seal level rising (iv) implementation of strong and effective market mechanism so that farmers access and control over the marker established, (v) enhanced capacities of public sector in seeds productions and distribution, more allocation for BADC must be ensured, (vi)  We demand extension of sustainable and eco-friendly agricultural technologies.