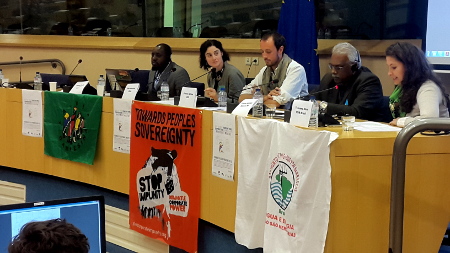 Hearing at the European Parliament, Brussels,

The work of the UN Open Ended Inter-governmental Working Group (OEIGWG) developing a legally binding international instrument on Transnational Corporations and other business enterprises is now in its second year. This OEIGWG was mandated in June 2014 (AHRC/29/6) its work has opened a new historic chapter in putting the challenge of regulation of TNCs back on the international agenda. Furthermore it underscores the search for effective alternatives on the trade, investment and access to justice.

In order to prepare the next meeting of the Working Group and put together the efforts and experience of activists and Human Rights lawyers from all over the worlds, GUE/NGL, PODEMOS, the Global Campaign to Dismantle Corporate Power and Stop Impunity, Friends of the Earth International, the Centre Europe Tiers-Monde (CETIM) and the Transnational Institute organized a Public Hearing at the European Parliament in Brussels, on How to hold TNCs Responsible for Human rights Violations. La Via Campesina also represented itself at the public hearing.

A summary of the intervention made by our members and staff is as follows;

Tchenna Maso from the Movement of people affected by large dams in Brazil (MAB, member of La Via Campesina) spoke about the environmental crime in Mariana, Rio Doce basin that affected 1 million people. The courts made an agreement with Vale, the company responsible for this disaster, without any participation of the affected communities who were left without being able to seek justice. This happened in violation of the right to free association because the company tried to prevent people to get organised in the region and forced people to accept an indemnity. The case of Mariana is an important symbol of the impunity of those corporations.

Themba Chauke from the Landless Peoples’ Movement in South Africa talked about the history of dispossession of black people through colonisation, Apartheid and capitalist development. This has led now to the repression and violence of the state and police protecting the interests of the TNCs against the people, such as the case of the Marikana masacre which involved the mining company Lonmin, and Amadiba assassinations, linked to the Australian Mineral Resource Commodities company.

Mateus Costa Santos from the regional Southern and Eastern African secretariat of LVC talked about the Pro-Savana agricultural mega-investment project in the Nacala corridor pushed by the Brazilian, Mozambican and Japanese governments which would lead to large-scale land grabbing (up to 14 million ha) and the displacement of at least 4 million people. Such projects are widespread  in many African countries and involve palm oil, sugar, energy (off-shore natural gas, coal) companies as well as REDD+ and World Bank projects. He also denounced the cooptation of civil society organisations through aid and development agencies and certain development NGOs.

To watch the full video of the event click here