Home » COP21: Towards a disastrous deal for the planet and its farmers 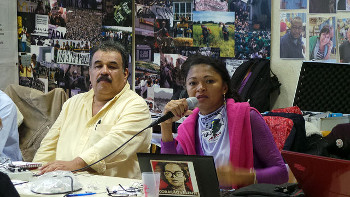 (Paris, 8th of December 2015) The peasants of the Via Campesina and the Confederation Paysanne, gathered in Paris for the COP21, are joining the grass-roots awareness raising movement on the climate crisis.

We refuse to be duped by the satisfaction sure to be expressed by participating States, regardless of the disastrous impact that their responses will have on peasant farmers once the negotiations have been concluded.

To discuss this, we invite you to a press conference, tomorrow, Wednesday, 9 December at 14h at 104 (Climate Action Zone) on the occasion of our Day of Peasant Agriculture.

Who will be present: Edgardo Garcia Aguilar, for the Environmental and Climate Justice Collective of Via Campesina, Paola Gioia, for the European Coordination Via Campesina, and Laurent Pinatel, spokesperson for the Confederation Paysanne.

At the Climate Action Zone, at 104, in Paris

16h30-18h Conference “No to agribusiness, Yes to peasant agriculture! “. Debate with peasant of the Confederation Paysanne and La Via Campesina.