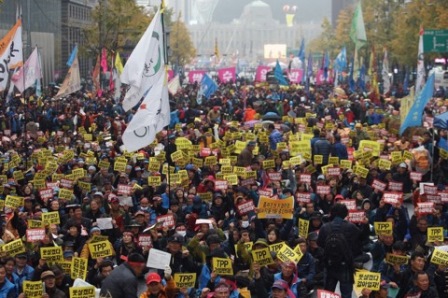 (Seoul, December 2015) On 14 November, police, without any legitimate reason, banned People’s Rally where about 130,000 demonstrators had gathered. They violated freedom of assembly by setting up the police bus wall in violation of the Constitution as stated in the ruling by the Supreme Court.

Therefore, a 69 year-old farmer, Mr BAEK Nam-gi remains unconscious at a hospital after he fell down and injured his head as police doused him with water cannon. When other demonstrators struggled to drag him away and to put him in the ambulance, police continued to fire water cannon. Other participants also were severely injured, some with bone fractures and bleeding eyeballs.

Police crackdown on demonstrators was definitely regarded as a murder attempt.

Therefore, we demand while wishing him complete recovery the following:

1.      NPA Commissioner General must step down being responsible for murderous crackdown and those concerned must be punished

2.      President Park Geun-hye must apologize for this murderous crackdown

Why, Mr Baek Nam-gi, a Korean farmer, why participated in the rally

The brutal police actions on demonstrators