Home » “We have no other way out than winning Food sovereignty”, Via Campesina at COP 21

Via Campesina Communication team at COP21 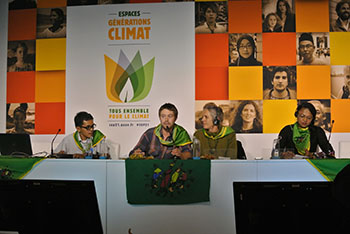 (Paris, 8th of october, 2015) If there is a serious commitment to solving the climate crisis, governments would be working with peasants and other small-scale producers, rather than negotiating with corporations. This was the message echoed loudly among peasant leaders today at “Climate Generations”, the civil society space annex to the UN official summit venue.

In a session called “cooling the planet through peasant agriculture and food sovereignty”, peasants from several countries in Africa, Americas, Asia and Europe made it clear to some 200 people who attended the session that the world needs to adopt agroecology and food sovereignty to save the planet.

“Agroecology, based on food sovereignty, is a call to change the system and feed the world,” said Josie Riffaud, a leader of Confédération Paysanne, a French peasant movement that is a member of Via Campesina. “At the same time, it cools our planet,” she added.

Adam Payne, a young leader of the Land Workers Alliance in UK denounced the UN business-as-usual approach at this climate conference. “There is incoherence and hypocrisy in the government negotiations space,” he said. “They are only just discussing market-based and false solutions to climate change here at the COP,” Adam elaborated.

As government officials are busy negotiating and composing what they refer to as the Paris Climate Accord, social movements outside denounce the corporate capture of the COP space and are calling for solutions from the grassroots. Even so, corporations sometimes take advantage of the peoples voices, by repackaging their ideas and concepts. For instance, Carrefour, one of the main drivers of agribusiness and responsible for damage to peasant and indigenous people´s livelihoods is using the concept of agroecology in its promotional materials and is an invited party to the inside negotiating process of COP 21. Martin Drago, an environmental activist from the global environmental powerhouse Friends of Earth, has denounced Carrefour for promoting a false and corporate driven agroecology.

“We have to defend agroecology as our way of life—as the language of nature—and defend it from attacks by corporations”, stressed Zainal Arifin, from the Indonesian Peasant Union.

Peasants and small-scale producers are responsible for more than 70 per cent of the food consumed globally with only 30 per cent of land. At the “Climate Generations” space, Via Campesina stressed that corporations must leave agriculture to peasants and pay the debt for having caused the environmental damage through destructive industrial agriculture. “We want that debt to be paid in rights to land, water, seeds,” said Adam Payne. He and others on the panel sent a resounding message that agroecology is an expression of those rights.

In response to a participant who asked about the possibility of a harmonious co-existence between big agribusiness and peasant agriculture, Maria Costa, from the Small-scale Producers Movement (Movimento dos Pequenos Agricultores) in Brazil had an answer. “It is naive to think that corporate agriculture can do no harm to peasants”, she said. “It destabilizes local markets, kills farmers, and damages the environment.” She concluded by saying that agribusiness cannot be humanized, and that she and other peasants were committed to fighting it.

Josie Riffaud, a leader from Confederation Paysanne, could have not closed the session better: “We have no other way out than winning Food sovereignty”.

Watch Via Campesina photos at COP 21

Also read: Hundreds of the world’s small-scale farmers join together at COP21