Home » Climate: Time to change our way to consume and produce food

From the Via Campesina Regional Training in Bangkok parallel to the UNFCCC negotiation meeting.

(Bangkok, 4 October 2009) La Via Campesina, a movement bringing together millions of small farmers and producers around the world, argue that it is the time to radically change the industrial way to produce, transform, trade and consume food and agriculture products. 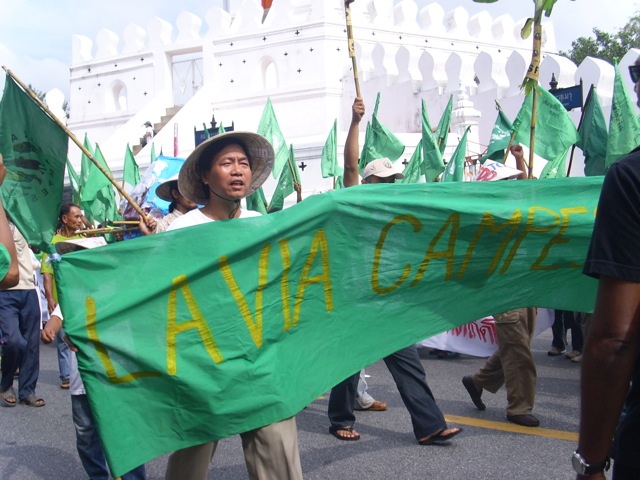 “As peasant we need water for farming but now water is difficult to get, our harvests are failing and the prices are low. Now farming is difficult” said Henry Saragih from Indonesian Peasant Union (SPI).

“In Korea we are facing heavy snow and strong wind and our harvest decrease when temperature decreases, our rice production decrease and this can make the peasant bankrupt.  “ said Gil Ja, Korean farmer

In Bangkok, during the UNFCCC intercessional conference La Via Campesina defend a clear position “Stop! UNFCCC is going off  the rails. Climate change has been worse small farmers livelihood: harvest failure due to unusual rain, drought, and the outbreak of pest. At the same time, the measures to find solutions by the international institution such as the process of Kyoto Protocol and the  UNFCCC are even potentially making things worse, not only for small farmer but also for climate change itself.

Parallel to the UNFCCC intersessional conference the members of La Via Campesina explore the false solutions presented by the UNFCCC. They create devastating impacts on people, especially the small peasants, through REDD and agrofuel projects that are taking over millions of hectares of the people’s land like in Indonesia, Thailand and other countries. The UNFCCC should also protect the people’s livelihood in this planet.

La Via Campesina believe we must implement new initiatives aiming at changing the model of production. Local production and people based protection of resources should be encouraged because it uses less fossil energy and it maintains livelihoods and local communities. Small farmers around the world defend food sovereignty as a way to overcome the climate crisis. It is the people’s right to define their own food policies, with a priority to local food production and sustainable small scale agriculture.