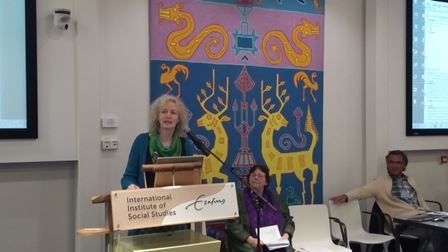 Below is the speech delivered by Hanny van Geel at the International Institute of Social Studies (ISS) colloquium on Global governance/politics, climate justice & agrarian/social justice: linkages and challenges. 4-5 February 2016, The Hague, Netherlands

I am rooted in farming, until 5 years ago I have spent all my life on a farm. My parents had a mixed farm. With my husband we had an organic farm with vegetables.

My first political act was in 1974 writing protest slogans on old bedsheets and paper that we attached to my father’s tractor. He and his colleagues were going to block the roads the next day. It was on the national news and in the newspapers. 30,000 farmers were in the streets for protest.

My father and the other farmers were in protest for the lowering of the price of wheat. In that period new Common Agricultural Policy (CAP) was going to be adapted and the fixed prices and import protection were going to be lowered. At that time the wheat price was €0.25/kg.

At that time the shift started to fasten: Farmers were pushed into specialisation, bigger farms, more loans, more input, higher output yields, and still a low income, just enough to survive and for some enough to do investments. The others stopped: 5 to 7 farms per day, a continuous process.

Our income and livelihood was now in the hands of European processes that were related to global processes. So we started to organise ourselves.

In 1986 the European Coordination of Peasants was founded to strive for better policies for agriculture. We found out that we had shared problems with peasants in other continents and in 1993 La Via Campesina was founded with contribution and help of CPE

1995 end of General Agreement on Tariffs and Trade (GATT) and start of World Trade Organisation (WTO), agriculture moved into WTO. And in Europe we got new agricultural policies that meet with the rules of WTO. In order to be able to continue to export on the world market, the prices were lowered and farmers got price-compensation, now called subsidies. This compensation was a window-dressing for what actually happened. Exports below cost of production on the world market could continue and processing industry was certain to be provided with cheap raw material.

1996 Food sovereignty was launched as alternative for trade under WTO and policies that were bad for peasants.

On the issues of trade and policies at the level of global and regional institutions we have not won any battle ever since.

In the spaces where we can talk, like Food and Agriculture Organisation (FAO), the issue of trade is not on the table.

Where we discuss policies, they are constructed in the framework of WTO and we get stuck in debates about payment schemes, not about real policies.

Where we protest in the streets we are criminalised and we get injured or killed, like the sad example of our Korean peasant comrade Mr Namki Baek, whose daughter,Minjuhwa Baek, yesterday told us about the situation of her father due to the aggression opposed on him, while protesting for a fair price for the rice, the basis of their existence.

Still we will continue to raise our voice in these spaces because we have to. The trade rules have so many impacts on our daily life that we cannot go to sleep and accept what is happening. But it is a struggle with unfair power balance and it requires a lot of energy.

All bad news? No.

The power is at local level. Citizens and consumers are changing. All over the world, without being pushed; lobby, law or subsidies, consciousness is rising and they get involved. Short food chains are created, local markets restored. This happens in developing countries and in rich countries. Something is changing, awareness is growing.

Is this enough? No

The powers are not equal. There is a strong need to support the new alternatives. Get local authorities involved, they have the power and the possibility to stand up against GMO’s against Free Trade Agreements (FTA), declare themselves Genetically Modified Organisms (GMO) or Trans Altantic Trade and Investment Partnership (TTIP) free municipalities. Create food councils.

We need help with that. Big research projects with European Union (EU) funding (taxpayers’ money) should be directed in the direction of fair short food chains, developing new markets all over the world.

We need data, to show what we do. We need to exchange peasant knowledge. We need Articles/research briefs (by economists and also linked to Transnational Corporations-TNCs/dismantling corporate power) Case studies (mainly positive examples of existing informal markets and more formal markets in Europe) Work with European local authorities on public policies, new types of markets.

End October in Nyeleni event in Romania, there we gather as food sovereignty movements of Europe. Peasants, fisherfolk, pastoralist, environmentalist, consumers, development organisations, Non-Governmantal organisations (NGO’s) and social movements, we all gather to discuss and build our networks of change of the food system. It is not just an event it is part of the on-going process.

Join our processes and support us to achieve food sovereignty

Besides that, everyone here can make a different choice in daily life. With what we buy and how we eat every day.

We have to act with head, heart and hands.