Home » A real system change has to come from below, says Paula Gioia, the European Youth ICC member of La Via Campesina 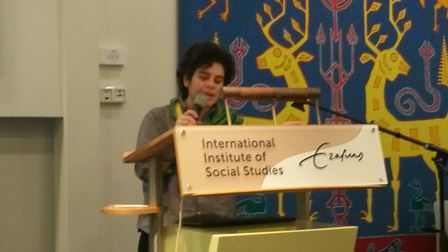 Firstly I would like to thank you all who were involved in the organisation of this great event. I also thank you for giving me this space to talk in the name of small scale farmers of the world. But I would like to say, that I see myself as just one of you. I could be Alberto, Ana, Henk, Midori, Sara, Jun, Ludwig, Sofia, Umut or any of you… Because I am pretty sure, that we all share similar values and are convinced that capitalism is rotten and is the origin of the multiple crises we are facing today. A real system change has to come from below. And I see that each of us plays a very important role in this process. Whatever sectors we belong to, I believe we are all working in one part of this big web.

It was great to share different concerns, struggles and strategies with you during these two days and to look ahead, in order to keep working together in a common plan of political changes. In this context of multiple crises, I can guarantee you, that we, small farmers, peasants, fisher folk, pastoralists, indigenous people, migrant workers of La Via Campesina will keep struggling for a system change. We will keep struggling against capital power and against patriarchalism. We will keep struggling in order to establish social, financial, climate, environmental and nutritional justice in our common planet.

We are pretty much convinced that food sovereignty is a true way to transform this destructive system which is in deep crises. Because food sovereignty is a real and deep ongoing political project that can reverse the crises. But one main condition for Food Sovereignty’s implementation is the convergence of forces, the convergence of the different sectors of the society. We all know that small scale food producers will never be able to establish it alone. Without a united and holistic struggle we won’t achieve local, national and global policy changes and wouldn’t reach a global perspective of future. For that reason it is important to have spaces like this, where we all come together and look deep and with trust into each other’s eyes.

I would like to share with you my story. I was born in an Italian migrant family and grew up in the upper middle class in the urban areas of Brazil. I went to a private traditional school and to one of the best public universities of Brazil in History. And, later l had the chance to come to Europe. It was in the leftist scene of Berlin, where my political engagement first managed to really outcrop. After some years, lost years, I thought I found a way out of this rotten society that made me feel so bad and depressed in the previous years. I went into farming. But this decision could not solve my problems. I realized that my struggle was actually just starting, because to achieve real changes you have to get together. At the same time I realized that the food sector is a key sector to achieve changes. And my struggle for changes turned in a much bigger one, in which I was not alone anymore. At least 200 million other colleagues are doing the same and millions of other actors are supporting it.

Today I am back to the academic benches. Not as an academic anymore, but as a peasant. I am convinced of the values that I developed during my way. I am very thankful for the education my parents gave me. And I am very happy I can use them in the service of justice and peoples’ sovereignty. All this shows me that I am deeply connected with my origins and that my struggle today here from the global north is deeply connected to my past and to the nowadays struggles in the global south.

I feel myself as just one of many examples, that our struggle for a system change can overcome existing classes and geographic barriers. It is very important that we use our different resources, talents and visions, in order to build something new, something healthy and strong. Whether it is the landless child in South Africa, the academic from Harvard, the indigenous community from the Americas, the rice farmer in South Korea, the CSA-group from China, the civil society suffering in Palestine or in Syria, the climate victims in Bangladesh or one of the last small scale farmers in Europe; in the end we are all one and our greatest strength is the solidarity with each other.

In that sense I would like to reaffirm Via Campesina’s dedication and commitment in this struggle. We would like to invite you all to be part of this struggle, engaging yourself actively in the Food Sovereignty movement. We are willing to see many of you in the next Nyeleni Europe Forum – the European Forum on Food Sovereignty in October in Romania. There we want to keep developing strategies to implement food sovereignty in and from Europe. Via Campesina has also already started the preparations for our 7th international conference, that will take place next year in the Basque Country. These events represent great moments to raise awareness for the crucial role, which Europe plays in the food system and to the crucial role of the food system itself in the context of multiple crises. In April this year we have also our Conference on Agrarian Reform in Brazil. More than to highlight the global issue of Land Tenure, it is an opportunity to develop together with allies further common political strategies based on people’s struggles. I invite all of you to be aware of these moments and to engage yourself in them, not talking about us, but WITH US! In the end we are all connected. And for real system change we need to: