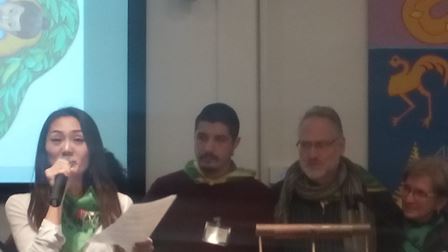 In solidarity, LVC delegates invited Minjuhwa Baek to speak about her father and the South Korean situation at the just ended International Institute of Social studies (ISS) Global Governance Seminar (February 4 and 5) at The Hague. Below is her presentation.

My father has fought for farmers’ rights as a member of the Korean Catholic Farmers’ movement since 1986.

Last year on November 14th he attended the demonstration in Seoul, South Korea to demand the government to raise the rice price as president had promised during the president’s election pledge.

Last year, the rice price fell to the same level as 20 years ago.

Government has sacrificed agriculture for joining international treaty like TPP (trans-pacific strategic Economic Partnership) or making free trade agreements with other countries. That’s why rice price is falling down and farmers in South Korea are in critical danger.

But Korean government instead of hearing him out, shot my father directly by the water cannon with very high pressure. My father remains unconscious from that moment until now. It’s been 83 days so far. And there was no single apology from the government. Moreover the president Park Geun Hye compared the protesters to Islamic State. It is unbelievable and beyond absurd to hear this. She said “South Korean protesters are terrorists”. Can you believe what she said in the government cabinet meeting? She tries to oppress freedom of speech and freedom of press not to listen to people.

We hear nothing about my father’s condition and situation from any main media coverage in Korea even though he is the most serious victim of abusing governmental authority. My family has accused police of attempted murder and filed a petition with constitutional court.

We want a sincere apology from government and punishment of the all related personnel. And I would like tell the Korean government stop sacrificing agriculture any more.

Watch video of this presentation: https://www.facebook.com/viacampesinaOFFICIAL/videos/958172980919940/