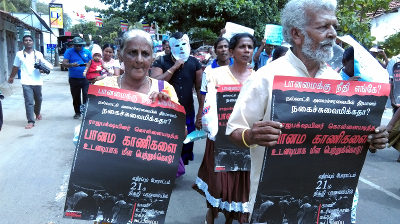 Several hunderd people protested in Panama, Sri Lanka, on the 21st of June, demanding justice and repatriation on the land from which they were forced to evict in 2010 by the then ruling government.

In February 2015, the ruling government had agreed to return the land to the people, but they allege absolute negligence of duty at the end of the government officials who are responsible to carry out the order.

To put an end to the never-ending wait, people had occupied their rightful land holdings in March 2016. However, instead of granting rights to the land, people have been served notice to evacuate the land by the end of June. People call it a dreadful situation where the order of the government is being contradicted by its own officials.

MONLAR, a movement of people for land and agricultural reform, also took part in the protest. 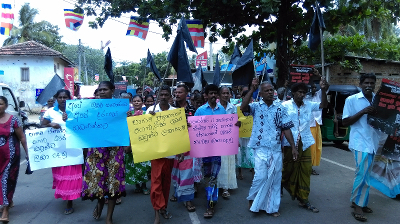 A similar movemement to reclaim and occupy their rightful land had taken place last year, which was later on called off after the government agreed to look into the issue and solve the matter immediately. Almost a year later, nothing seems to have moved forward.

“Do not try to take us away from our lands. If anyone tried, that will be a catastrophe. These are our lands. We were promsied by the Government that the land would be returned. Please do this without providing false and fake solution.”, one of the protestors warned.

A sticker was also distributed among tourists in Panama and Arugambay to build their awareness on the issue.

A TV news report (without English Subtitles) of the issue can be seen here.