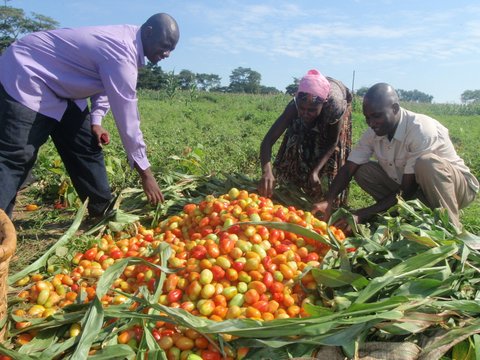 The recent debate around the 2012 National Biotechnology and Biosafety Bill in Uganda and the Genetically Modified Organisms (GMOs) it promotes elevated issues related to food access across the country. Although the bill was tabled in Parliament earlier this year, Ugandan peasants and small farmers still have reason to worry that control of their land and its resources could quickly slip further away—especially if they are not tightly organised.

The push for GMOs and corporate control of agriculture is certainly not unique to Uganda, let alone Africa. Patented seeds, land grabs, and dumping of staple food products have been routine over the past few decades—forming the structure of a transnational economic system that favours profit over rural people and their right to a sustainable livelihood.

From Latin America to Southeast Asia, peasants have undergone waves of displacement and seen healthy crops turn poisonous. But small farmers and the grassroots organizations on which they rely have more in common than a shared plight; they are part of an organised struggle.

Via Campesina, the international pro-poor peasant movement made up of more than 200 million members in 79 countries, is up for this fight against those who seek to turn the world’s food supply into big business. The global agrarian movement brings small farmers’ voices to international spaces where they are increasingly recognised—such as the United Nations Food and Agriculture Organisation (FAO) and the UN Human Rights Council. At Via Campesina’s VI International Conference this June in Jakarta, the movement proved just how much it has accomplished in its 20-year history and affirmed its commitment to growing its mission in Africa.

Ugandan peasant movements—not even the Uganda National Farmer’s Federation—are not yet represented as members of Via Campesina. An increasing number of voices appreciate what a global platform could do for the national struggle. “Since GMOs have just gained prominence in Uganda, it’s a good idea to speak as a unified block,” said Margaret Najjingo Mangheni, a professor in the Agricultural Department of Makarere University. “We need to identify allies with whom we can work across borders to represent farmers,” she added.

In Africa, the issue is urgent. With the introduction of neoliberal agricultural policies and commercial export oriented farming, produce prices have plunged. This leaves farmers unable to survive on their land while facing the challenges of high food prices and hunger, land grabbing, and GMOs. The introduction of hybrid seeds was brutal, forcing peasants to buy seeds that had been in their family farms for generations. Additionally, hybrid seeds also required peasants to buy fertilisers and chemicals—not only emptying wallets, but also putting rural families’ health at risk. Further worsening the situation, agricultural land is increasingly moved from production of food crops to cash crops.

The combined result is larger profits on the world market, and devastating impacts in Global South countries—contributing to the food crisis. Such policies put African peasants at the mercy of the fluctuating international market—when instead they need policies that encourage their ability to produce quality food and market it at fair and stable prices. Governments and representatives of corporations often disregard peasants as roadblocks to transnational development rather than key players in feeding and cooling the planet.

More than 3,000 kilometres south of Kampala, the story of Zimbabwe Small Holder Organic Forum (ZIMSOFF) provides an example of unifying peasants at the local, national, and international levels.

When Elizabeth Mpofu attended the World Summit on Sustainable Development in South Africa, she realised what was holding peasants back in her native Zimbabwe. The participants at the summit were articulating their concerns as a united movement. They were more successful at getting their message across than the farmers she worked with back home that were not as strongly organised and often voiced their concerns alone. Because of this, she vowed to create a forum where peasants could strategize and work together. “We were tired of being represented by NGOs and farmers unions that didn’t give farmers a chance to speak out and decide their own future. Outsiders would deliberate for us, come back, and tell us what to do,” said Mpofu, who is a farmer herself. “We decided enough is enough and built a platform to take action as peasants,” Mpofu explained.

In 2002, Mpofu and some 30,000 peasant farmers formed ZIMSOFF. “We initiated it because at the time we were looking at production systems focused on commercial farming that used chemicals. We examined the soil—which was full of fertilisers that depleted our land from producing to its best potential. During Zimbabwe’s land reform, when we received parcels of land, we decided to revisit the indigenous way of farming,” said Mpofu, “When our forefathers farmed, the environment remained intact—thanks to organic practices.”

Africa is largely a continent of peasants. In the majority of African countries, most of the population lives in rural communities with agriculture being the largest contributor to GDP. These populations form the backbone of African peasant movements that are composed not just of small and medium-sized farms, but also pastoralists and fishing communities. Most African peasant movements are unions, which are comprised of smaller local farmer organizations that come together at the national and regional levels under umbrellas like the Eastern and Southern Africa Small Holder Farmers Forum (consisting of groups from 13 countries). One of their main demands is to give more respect to the peasant communities whose main purpose is to produce food for their own consumption.

On the other hand, industrial agricultural corporations, whether high-tech companies that make costly hybrids and risky GMO seeds, or the multinational food processing industry, are intent on driving their own profit through export of cash crops instead of using sustainable agriculture to feed people locally. Via Campesina argues that these policies are responsible for the 1.2 billion people worldwide who go hungry despite the abundance of crops produced. These economic policies affect not only rural but also impoverished urban communities, where it is often more difficult for people to organise and fight for their rights.

Many peasant movements and grassroots organisations have come together under various banners to promote food sovereignty—the notion that peasants have the right to produce healthy and culturally appropriate food on their own, rather than depending on transnational corporations (or even charities) to fill their plates.

Via Campesina is the movement that first coined the term food sovereignty in 1996—a stark divergence from the more recognized term “food security,” which only accounts for the availability of food and one’s access to it. Via Campesina is gaining momentum in Africa, with member organizations from South Africa to Madagascar to Senegal—along with scores of countries in between. Each of these movements recognises that multinational corporations endanger peasant agriculture and render people landless.

Ever since ZIMSOFF became part of Via Campesina, Mpofu notes that having the support of that global social movement has helped her and fellow farmers through trainings, exchanges with other peasant organizations, and workshops. And now a bigger honour has come her way: in Jakarta, Via Campesina announced that it is moving its international secretariat from Indonesia to Zimbabwe. In her new role as secretary general, Mpofu will be the first women to lead what is perhaps the world’s largest political movement.

“This is great news for African peasants that Via Campesina is coming to Zimbabwe!” Mpofu exclaimed with a smile. “The GMO and green revolution companies have refocused their eyes on Africa because their model has failed in other parts of the world. They are putting in billions of dollars and imposing these technologies by using our politicians and governments. This is a type of recolonisation of our continent by transnational corporations—and we will not accept it,” she firmly added.

Cosma Bulu, a women leader of Mtandao wa Vikundi vya Wakulima (MVIWATA), a Via Campesina member group from Tanzania, reported that her peasant organization already has more than 100,000 members, and is quickly growing. Their proud slogan is, “the defender of the farmer is the farmer himself.” Twenty-two peasants formed the organisation in 1993 (the same year Via Campesina was founded) in order to create a farmer-to-farmer exchange forum. MVIWATA defends socio-economic interests and trains its members in best ecological practices.

“We oppose chemical fertilisers and educate against GMOs that cause health problems whose side effects manifest,” Bulu offered. “We prefer natural farming, and encourage the use of natural fertilisers like manure and grass.”

Mangheni stressed that Ugandan movements need an international voice—and that Via Campesina offers such a global stage. “The movement is something new, and we must push forward together as allies in identifying the issues that affect farmers in in Uganda,” she said.

As Via Campesina gains momentum globally, Ugandan peasant movements are strong candidates to join the strategic African-led alliance—letting the world know that the greater continent and its resources are not for sale.