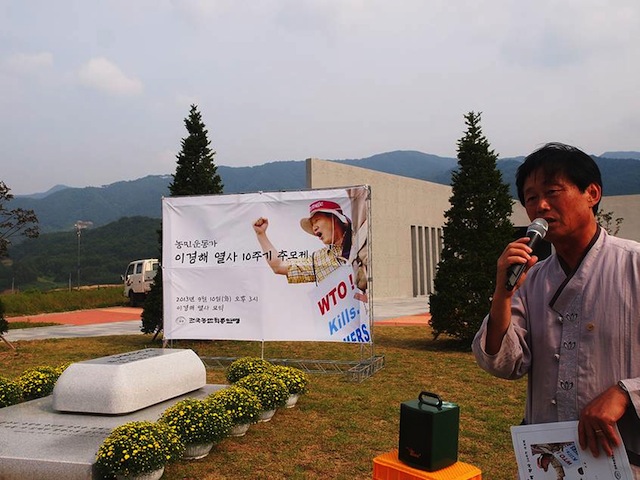 (Séoul, September 16, 2013) Memorial ceremonies marking the 10th anniversary of the death of activist farmer Lee Kyunghae were held on September 10 to 11. Lee made a noble sacrifice shouting the slogan “WTO Kills Farmers!” in Cancun, Mexico in September 11, 2003, where the 5th WTO Ministerial Conference took place.

Korean Peasants League (KPL) held the 10th anniversary ceremony in the graveyard where Lee Kyunghae is buried in Jangsoo-gun, Jeonbuk, Korea. “His sacrifice weakened the WTO and rendered it inactive, yet a number of FTAs are putting Korean farmers on death row where they await impending executions,” said Lee Kwangsuk, chairman of KPL in his memorial speech. “We will block these FTAs to defend Korean agriculture against foreign capital as was his wish.”

Ha Yunho, chairman of KPL Jeonbuk Province appealed that “Lee Kyunghae must be officially recognized as a martyr (by the government). All farmers’ organizations are responsible for working together to elevate him to the martyr of all people.”

“The death of my father gave me wise views of the world,” said Lee Jihae, the martyr’s daughter. “I hope his spirit is remembered and his wishes are realized in Korea.”

Henry Saragih, Via Campesina’s general coordinator, sent a solidarity message to commemorate the anniversary. He said, through the message that was read by Kang Dabok, chairman of Korean Women Peasants Association (KWPA); “The martyr’s gone but his sprit is with us.” He also expressed a determined resolution to block WTO in solidarity with Korean farmers, mentioning “the next WTO ministerial conference in Bali, Indonesia in December 2013.”

On the following day, 11 September, Korean Advance Farmers Federation (KAFF, chaired by Kim Joonbong) held the 10th anniversary commemoration and a memorial debate at the Agricultural Training Institute not far from the grave. KAFF Policy vice chair Yoo Keunjoon said in the debate- ‘Reunite with Lee Kyunghae’, “We should inherit his spirit and raise our voice with continuous proposal of policies.”