Home » Brazil: The time for the Peoples’ Land Reform 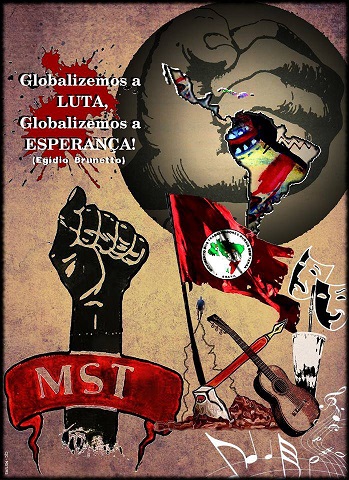 (Brazilia, January 17, 2014) We arrived to our VI National Congress as the Landless Workers’ Movement (MST). We arrived after more than two years of studies, debates, reunions, assemblies and discussions carried out by our grassroots organizations and representatives from all over Brazil.

We are celebrating our 30th anniversary, making us the oldest peasant movement in the history of Brazil.

We arrived to these two important events in our history with a well-defined challenge, which is clearly seen in our congress’ motto and in our future work: “Struggle for, work towards a People’s Land Reform”

The process, by which we have built our Congress from a grassroots level and throught our mobilizations, had made it clear that it is not enough to carry out a traditional Land Reform that only distributes the land. The agribusiness industry has not just taken over productive and unproductive land to produce for export thereby destroying the environment; it has also gained support from governments and within the whole structure of the state in order to fulfill its interests.

Through the implementation of a Peoples’ Land Reform, we aim to secure the people’s right to decide what to produce and what to eat. We struggle for our land so that it is not used to produce ethanol or cellulose. We want that ‘’el campo’’ (the land destined for agricultural production) becomes a decent place to live, where the youth can live in a worthy manner and everybody enjoys her/his right to education, health, and to develop own industries in order to increase the value of our production.

A Peoples’ Land Reform can only be the outcome of everybody’s struggle, not just the efforts of landless workers. Taking into account that the agribusiness’ model threatens peasant communities, it is necessary to build alliances and mobilize together with those who share our ideas: small-scale farmers, Maroons (former slaves and their descendants), riparian people, agronomy and forestry students as well as anybody willing to build on an alternative model of production.

This Land Reform will also need the support from workers in the urban sector. We need to expose the true nature of the agribusiness industry, which poisons our food, uses the land to produce with the sole goal to export, and promotes slavery and a constant disrespect to environmental and labor laws, among other bad practices.

Our Enemies are powerful and influential. The agribusiness industry has many allies in the media and in our legal system. However, we have learned in our 30-year long history that we need to be fearless and never give up when facing difficulties. That is the reason why we have managed to help providing land for millions of families and feeding hundreds of municipalities nowadays. It is thanks to our struggle and determination as well as the enthusiasm generated by our Congress, that we carry on working towards a Peoples’ Land Reform.

More Information on the Congress: