Home » Farmers mobilize in Brussels: “Reclaiming peasants’ rights over our own seeds” 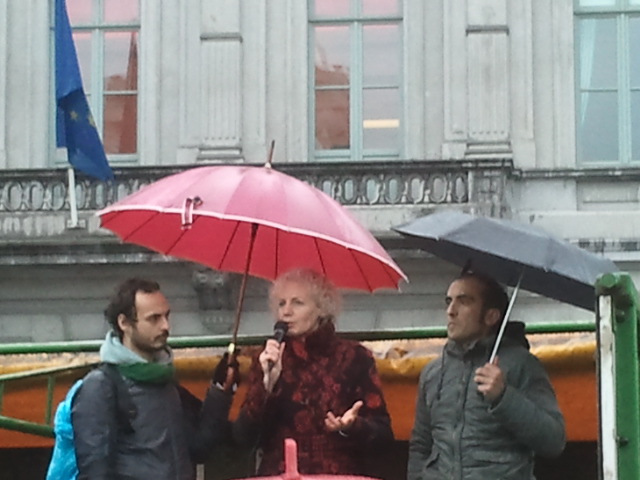 (Brussels, 20 January 2014) At the start of the year devoted to family farming, which is being called on by the UN to feed the world, peasants from all over Europe are demonstrating before the European Parliament on Monday January 20 2014. We have come to reclaim recognition of peasants’ rights to select, preserve, use, exchange and sell our own seeds. We declare that our seeds are essential if we are to feed the world. Only with our seeds can we overcome the challenge of discontinuing the use of toxic pesticides, protection of the environment and the struggle of adapting to climate change. Only peasant family farming helps to cool the planet.

GMOs must be banned. Co-existence alongside them is not a viable option. Intellectual property rights on living organisms, which allow industry to lay claim to all the world’s seeds, must also be stopped. We call on the European institutions to enshrine these peasants’ rights in all regulations.

Andrea Ferrante , an Italian peasant, condemned “patents on plant genes that are contaminating peasant seeds and bringing them under the ownership of multinationals.”

Hanny Van Geel, a Dutch peasant, hightighted that “it is only by preserving biodiversity through farmers’ seeds that we can ensure good quality and healthy produce for consumers.”

Guy Kastler, a French peasant, offered a reminder: “only farmers’ seeds are suitable for use in every field without the use of chemicals, precisely because they have been selected and multiplied in these fields.”

Unai Aranguren, a Basque peasant, added that “we cannot achieve food sovereignty without peasants’ own seeds”.

Elizabth Mpofu, a peasant from Zimbabwe and spokesperson for Via Campesina International, closed the demonstration with these words “African farmers still have all the seeds gathered and selected by hundreds of generations before them . They are committed to growing and preserving these seeds and to protecting them from GMOs and patents in order to pass on this invaluable heritage to future generations, who will need it to feed themselves. The current legislation does not guarantee peasants’ rights and for this reason European laws should not infringe on the rights of peasants around the world”.