Home » “Be Proud to Become a Farmwoman!” say Elizabeth Mpofu 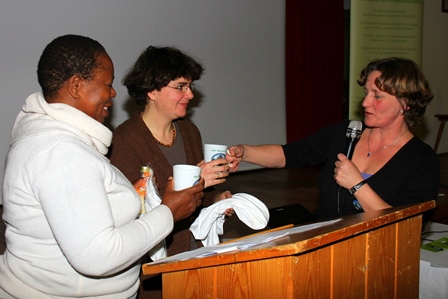 (Germany,Teisendorf, January 21, 2014)(al) It is certainly not an everyday occurrence, that a woman from Zimbabwe, who runs a small farm in that country, congratulates a young woman from Bavaria for her decision to also run a small farm and tells her to be proud of that decision.  Elizabeth Mpofu is, however, not an everyday woman, but the general secretary of the worldwide peasant organization “Via Campesina”, an association of more than 160 independent peasant organizations in 63 countries.  Mpofu has experienced on her own body and in her own mind, what it means to want to be a small-farmer.  She and her husband work on their plot of about ten hectares in the South-East-African Country.  The difficulties, that she has had and still has to overcome, not only in an economic way, in the pursuance of her profession as a farmer, are at least as great, as those facing a young farm-woman in Bavaria.

Accompanied by Angela Müller, speaker for agrarian policies and food and agriculture of the “One World Mission” Mpofu visited on the invitation of a number of organizations, like the AbL, an association of rural, traditional farmers, attac, BDM (Association of German Milk Producers), Bund Naturschutz (Association for the Protection of Nature) as well as some other organizations, the small town of Teisendorf, to give a talk and hold discussions with the visitors, about farming and agriculture.  In the hall, filled almost to the last place, organizer of the evening and organizer and speaker for the agrarian alliance of the districts of BGL (Berchtesgaden) and Traunstein, Leonhard Strasser, welcomed Mpofu, Müller, Gertraud Gafus, federal chairwoman of the AbL in Germany, Albert and Elisabeth Aschauer, the deputy chairpersons for the BGL of the Milk-Producers Alliance BDM, Agnes Thanbichler, town- and district councilor for the town of Laufen and spokesperson for the attac group Rupertiwinkel, as well as Dr. Joseph Heringer, the former head of the ANL (Academy for the Protection of Nature and the Countryside) and the many other visitors.  Strasser showed himself as very pleased about the great interest the talk of Mpofu had obviously created amongst the local population.

A short film about small-farmers in Ethiopia was shown as an introduction to Mpofu´s talk.  It depicted, how much pressure there is on these farmers, not only there, but in many other countries as well, from big investors and big corporations and how much these farmers suffer, because of that.  The investors and corporations are primarily not concerned with helping the people in Africa and to relieve or eliminate their suffering, but to maximize their own profit, as the film showed by numerous examples.  Land-grabbing and profit-maximization are the driving forces of their investments.  Elizabeth Mpofu took up that line, with her assertion, investors would take hold, wherever there is cheap land and corporations attempt to push out the traditional small farmers and install an industrial, mostly export orientated agrarian economy. The food sovereignty of the population is thereby negated.  Mpofu reiterated there is enough food for everyone in Africa and used as an example the tons of corn, millet and abundance of other products that she and her husband produce on their small farm.  Problems arise however, because of restricted access to markets at fair and cost-covering prices and the competition from highly subsidized imports from countries like South-Africa (in Zimbabwe), or Europe, especially in the densely populated areas along the coast of Western Africa.  The periods of starvation, that, without doubt, occur in Africa, result primarily from the restrictive trade rules, that favor big corporations and prohibit the seeding of traditional, indigenous food stuff by the small scale farmers.

In the discussion, that followed Mpofu´s talks, the low social standing of the small-scale farmers, in Africa as well as in Europe, was deplored.  There were also questions about the corruption in African countries, that crop up invariably when Europeans talk about Africa.  This corruptness is supposed to hamper a good and sufficient production of food and other things.  Mpofu replied to this, in Africa, as well as in Europe and other parts of the world, there are good and bad governments and bureaucracies.  To reduce bad conditions to these facts only, would be short-sighted.  On top of that, in African countries, just like most other places, bad governments could be voted out of office, if the people would show more interest in politics and its dealings.  This is a message that should be spread by concerned people there, as well as here said Mpofu.  It is also necessary to raise the social standing and acceptance of small-famers in Africa, as well as Europe, because, as was clearly evident in the discussion, it is after all the small farmers, who make a good and secure supply of food for all of the population possible.  Care has to be taken however, to make sure to preserve and build up good soil and the breeding of animals should also be done in a way to ensure this goal, instead of relying on chemicals, hormones, genetic engineering and pesticides.

Mpofu became almost emotional, when she, at one of the last points in the discussion, answered the question of a young woman, who asked her, if she should become a farmer and Mpofu advised her to do that and be proud of her decision.