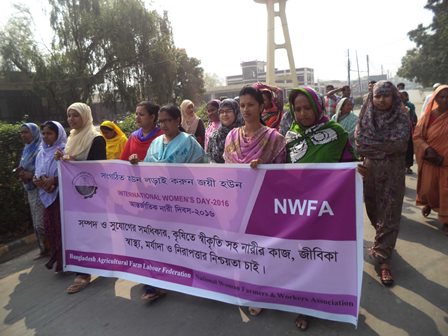 Chief Guest Dr. Jiban Krishna Biswas said that half of the population of the country is women. Bangladeshi Women have immense contributions in all sectors particularly in agriculture. Progress in agriculture sector is achieved in spite of hundreds of problems obstacles only due to active participation of women by the side of men. He also added that he is aware about their demand of increasing maternity facilities for women farm workers, setting up a day care Centre and a shade with toilet facilities in field. He ensured that the authorities have a plan to provide day care facilities and soon they will take the initiative regarding this. He also added that in the field, toilet shade will be built considering women workers’ health.

Nurjahan Begum said “woman agricultural workers are facing different forms of deprivation and discrimination. Even we don’t have equal maternity facilities, we can’t feed our babies during working period.”

She added that there are no toilet facilities for women in the field and we all should fight against all discriminatory practices.