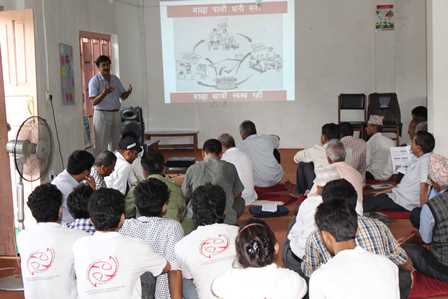 In the inaugural session moderated by Ganesh Timilsina of National farmers Association, peasant leaders and NIA representatives Balram Banskota from All Nepal Peasants Federation highlighted the objectives of training workshop. Mr. Banskota highlighted two broad objectives of the program, one regarding the  traditional fishing and problems of fisher folks and another on technical and managerial aspects of commercial fish farming. Similarly, Nahendra Khadka of All Nepal Peasants Federation (revolutionary), Tulsi Giri of National farmers Association, Ganesh Shah of Nepal Peasant Federation, Bhakta bahadur Basnet of National Farmers Group Federation, Lyam Bahadur Darji of National Landless Right Forum, Bhairab Regmi of All Nepal Peasant Association, Thakur Bhandari of Federation of community forest user association also presented inaugural speech focusing the needs of commercialization of fish farming and ways to ensure the livelihood of traditional fisher folks. The speaker highlighted the problems of fisher folks communities due to hydro electricity generation and river pollution. Participants’ from Majhi community, one of the traditional fisher folks highlighted that ‘Fish collection is going to be a difficult occupation seriously impacting our communities’. The speakers on the dice, all have a single voice that while there need to be special program for traditional fishing communities, while there is a huge prospects and we have a lot to do for the commercialization of fish farming from hatchery to market.

Inaugural session was followed by main session chaired by Peasant Leader Ganesh Shah and moderated by youth leader Pramesh Pokharel where experts and resources person presented their papers and fisher folks and fish farmers shared their experiences. In the session, resource person Rakesh yadhav presented the paper on Aquaculture in Nepal including Hydropower and its impacts on Fisheries. Similarly, Madhav Shrestha, Prof. of Fisheries and Head of the department in Agriculture and Forestry University presented the paper on technical aspects of fish farming and challenges. Ramananda Mishra, program Director at National Fisheries Development Department, Ministry of Agriculture Development, Nepal presented a paper on situation, challenges and prospects of Fish farming in Nepal. Dr. Prasad Yadhav, Chief of Bhandara Fish Farm and under secretary of the Ministry of Agriculture Development presented a paper on Hatching and Hatchery to market, commercial fish farming. Similarly Dr. Ramananda Mishra also presented a paper on prospects of Trout farming in Nepal. Experts also talk about special features of different fishes and special care to be given to them. Along with the presentation papers and lively lectures, books on commercial fish farming were also distributed to the participants.

The presentation was followed by a plenary and discussion where farmers, students and fisher folks shared their experiences and floored the queries. The two way interaction really made the events successful in fulfilling the objectives of program and making the issues and problems of farmers clear. In the discussion participants raised a serious issue that commercialization of aquaculture should not destroy the most fertile and irrigated rice fields. They also pointed out that youth focused fishery program is not reached to young farmers and is not effective that’s why it needs to be revised. The plenary session concluded that Fish Farming is the most viable and profitable business in many parts of Nepal, If fish farming is professionalized, it will not only be a decent source of livelihood contributing food and nutritional security but also reduce millions of loss to the country in importing fishes.

After the training, the participants were taken to three different fisheries pond with three different features in Parsa and Tadi of Chitwan.  In the field participants observed the farm, from a small field of one hectare to a big farm extended over 10 hectares. The field visit was important to share the farmers the statistics of growth period, profit and investment and feed management. It also explained the various aspects of pond construction and fish selection.