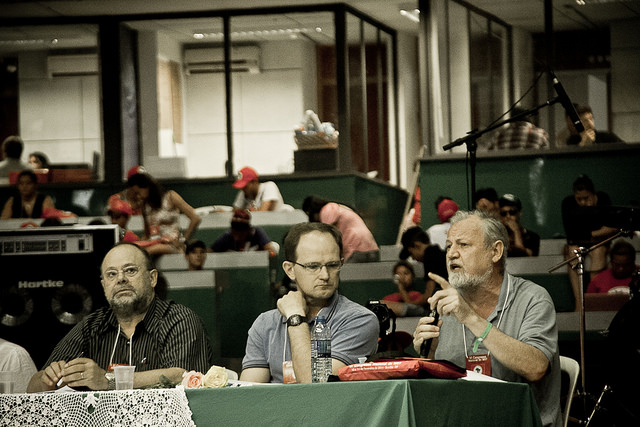 In February 2014, Landless Workers’ Movement (MST) celebrated its 30th anniversary and also held its VI National Congress. The motto of the congress “Struggle for, work towards a People’s Land Reform” captured the movement’s history and its future work. Through the implementation of a Peoples’ Land Reform, MST aims to secure the people’s right to decide what to produce and what to eat. MST struggles for land so that it is not used to produce ethanol or cellulose. The Congress stressed that they want that ‘’el campo’’ (the land destined for agricultural production) to become a decent place to live, where the youth can live in a worthy manner and everybody enjoys her/his right to education, health, and to develop own industries in order to increase the value of our production.

A Peoples’ Land Reform, MST noted, can only be the outcome of everybody’s struggle, not just the efforts of landless workers. Taking into account that the agribusiness’ model threatens peasant communities, it is necessary to build alliances and mobilize together with those who share our ideas: small-scale farmers, Maroons (former slaves and their descendants), riparian people, agronomy and forestry students as well as anybody willing to build on an alternative model of production. This Land Reform also needs the support from workers in the urban sector. This will help to expose the true nature of the agribusiness industry, which poisons our food, uses the land to produce with the sole goal to export, and promotes slavery and a constant disrespect to environmental and labor laws, among other bad practices.

Below are three interesting articles prepared on the issues discussed during the MST 6th Congress in February.

1. Interview with João Pedro Stedile:“Capital is imposing agribusiness as the only form of production” For João Pedro Stedile, from the national leadership of the MST, this scenario is reaching completion under Dilma’s government, which is controlled by agribusiness. Download the interview

2. Interview with Kelli Mafort -“We need to radicalize the fight for land” In this interview, Kelli evaluates the Congress and its actions; the importance of the contact between the base and the movement’s leadership and how the experience accumulated during the event will contribute to the future of the MST. Download the interview

Whoever thinks of agribusiness and imagines large estates producing food for Brazil’s refrigerators is gravely mistaken. What the television doesn’t tell us is that agribusiness is a form of agricultural production in which food isn’t actually produced. It doesn’t tell us that agribusiness depends on large amounts of agritoxins, and that what is produced is, in the end, exported abroad – even if public resources are used. Even worse, most land is in the hands of foreign businesses and international banks. Check out below what the real consequences of agribusiness are. Download the article