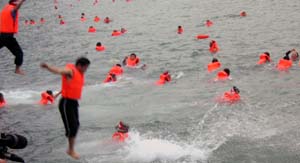 (Hong Kong) More than two hundred farmers from the Korean Peasant League (KPL), a member organisation of La Via Campesina, jumped into the cold water of Hong Kong harbour to reach the Convention Centre where the Ministerial Conference is deciding their future. This action occurred at the end of a peaceful march when thousands of farmers and their allies were blocked by barricades in front of the Convention Centre.

KPL and La Via Campesina demand an immediate stop to the WTO negotiations. “We will keep doing this kind of desperate action because our voices are not being heard by the negotiators. We do not want free trade, we do not need it”, said Park Min Ung, General Secretary of KPL. WTO free trade policies support agribusiness and kill small producers. WTO forces farmers around the world to compete with each other, which drives prices down and increases poverty. “We are sinking into debt and losing our land and livelihood”, said the Korean farmer.

La Via Campesina promotes food sovereignty, the people’s right to define their own policies and to protect the livelihood of food producers and the consumers’ right to determine what they eat. Food is too important to be left to trade deals.

La Via Campesina is an international peasants movement which coordinates peasant organisations of small and medium-sized producers, agricultural workers, rural women, and indigenous communities from Asia, America, Europe and Africa.

More pictures and information about the follow-up of this action please call: