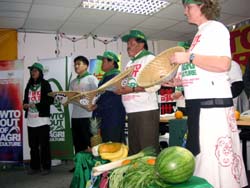 La Via Campesina delegates from Thailand, Korea, Norway and Honduras gave away seeds to all the participants as a welcome to the conference. Henry Saragih, General Coordinator of La Via Campesina, introduced the group and discussed how La Via Campesina is a legitimate global voice for millions of peasants. International trade policies have the same destructive effect on farmers, workers and the environment all over the world.


Mr. Diamantino Nhampossa, representative of the National Peasant Union in Mozambique, talked about how the liberalization of the sugar industry in 1987 has damaged small farmers and led to increased poverty and hunger. For farmers in Mozambique, stopping the WTO brings hope for a better life in agriculture for both Africa and the World.

Ms. Dena Hoff, representative of the National Family Farm Coalition (NFFC) in USA, talked about the lack of family farmers’ influence on farm and trade policy. The NFFC launched a national campaign on food sovereignty to give farmers the first right to domestic markets at a fair price. Food sovereignty will be ensured by cooperative international trade.

Ms. Geum Soon Yoon, representative of the Korean Women Peasant Association said that in November alone, seven Korean farmers have attempted to commit suicide, and four of these have died. Another farmer was brutally beaten by the police and later died. Ms. Yoon also explained the historical and cultural reasons for the strong opposition to the WTO by Korean farmers, and why more than 1,000 Korean farmers are coming to Hong Kong: “Agriculture has existed in Korea for 15,000 years. It is a central part of our culture. Agriculture is the foundation of our lives, it is like our mother. We fight against the WTO with a level of urgency and desperation because we are trying to protect our mother, the giver of our life. We are not here as rebels, but as sons and daughters defending our mother whose life is being threatened.”