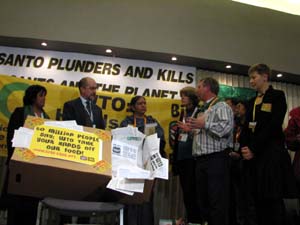 (Hong Kong) Today, Confederation paysanne, Friends of the Earth international, Greenpeace, ATTAC, Oakland Institute, and IATP handed over a petition asking the WTO to respect the European choice to have a moratorium on GMOs.

This petition was signed by 135.000 citizens and is backed by 165 civil society organisations which represent more than 60 million people. It requires a halt in the use of biotechnologies in en agriculture.

The fact that in the Swiss Confederation million people voted in favor of a moratorium on GMOs on the whole Swiss territory shows that when democracy is allowed, citizens always vote against biotechnologies which only profit transnational companies and stakeholders.

The WTO will release on Janurary the 5th its mid-period report on the complaint which oppose the United States to the European Union on GMOs. It should prioritize the interests of citizens, farmers and consumers before those of transnational companies which plunder the earth like Monsanto.

Pascal LAMY commited himself to speak with a delegation from the civil society which holded a petition against GMOs signed by international organisations representing more than 60 million people and by 135.000 people all over the world on December the 14th at 15 :30 PM. He finally did not come and was replaced by an assistant.

Pascal LAMY commited himself to speak with a delegation from UNICE, the European employers Cartel, on December the 14th at 12 :00 AM (MEDEF represents French employers). He arrived on time, was visibly relaxed, shaked hands with many people and discussed many important issues.

Question : What do you think are Pascal LAMY’s priorities ? The interests of transnational companies or the concerns of the citizens?