Call for action: As the world marks World Food Day on the 16th October, we call for true solutions to climate change, for Food Sovereignty, and for an end to the corporate control of our food and our lives. 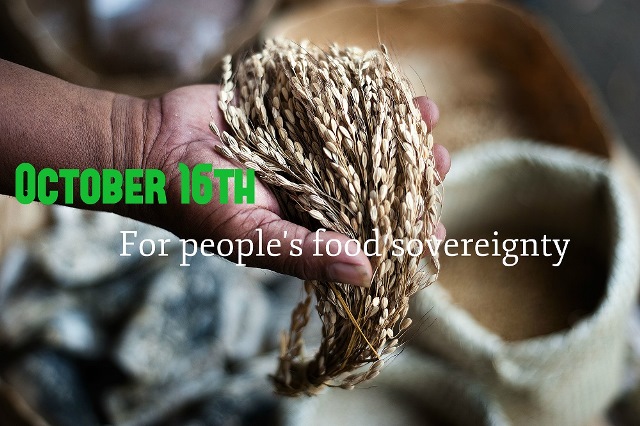 (Watch the trailer of the video “Together we can cool the planet!” to be launched this October 16)

TNCs displace and dispossess millions of peasants and family farmers, women and men of their land, forests, water and territories to set up profit seeking destructive enterprises. Globally, over 1.2 billion peasants and their families : ensure food sovereignty and the right to food by  providing  up to 80% of locally consumed food and  cool the planet and conserve biodiversity and seeds. On October 16th, let us raise our voices and resist land grabbing, so-called climate smart agriculture laden with agro-toxins and genetically-modified seeds; and call for a radical transformation towards a fair and decent food system for all. We continue to propose wider adoption of agroecology and the construction of people’s food sovereignty.

The power and impunity of TNCs through “bribery democracy” stifles peoples’ voices in policies and legislative processes at all levels. Democracy wanes as governing classes scheme  with TNCs in search for more private profits. They use Free Trade Agreements (TTIP, CETA, TTP, EPAs etc.) to dominate, discriminate and monopolize in an attempt to survive the capitalist crisis. Neither nature nor humanity are respected but rather are destroyed and exploited to regenerate TNCs and create new markets for profits. Thus, millions of affected people leave their territories, migrate to developed industries countries. The recent surge in migrants from North Africa, the Middle East, Asia and Latin America is also a testament to the geopolitical conflicts and neo-liberal economic interests that cause wars and displacement. We decry and denounce the current cruel migration policies, as well as all measures put in place to prevent or to complicate the free access to Europe[i],US and other developed countries. We denounce the incoherence of the neoliberal system that claims free access for goods but create borders for human beings. We push for a system change that recognizes peoples’ needs, accords dignity and respects nature, and people not profits!

To globalize the struggle and the hope, share your actions by sending us (lvcweb@viacampesina.org) photographs and videos, marches, forums, stories and other actions, which we will share through our website (viacampesina.org/en/), TV (tv.viacampesina.org/) and social media.

[i] The European Coordination Via Campesina in solidarity with migrants; See also We who come from Africa, the Maghreb and other countries