“Agroecology is our peasant practice of resistance to agribusiness and to the advance of capital”: CLOC/Via Campesina in the V Latin American Congress of Agroecology 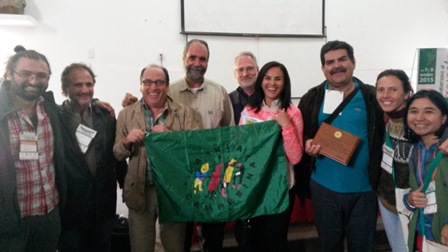 (Argentina, October 13, 2015) In the V Latin American Congress of Agroecology, held at the National University of La Plata in Argentina, from October 7 to 9 of 2015, the Latin American Scientific Society for Agroecology (SOCLA) gave an award to La Via Campesina, “in recognition of its example of tireless struggle in favor of agroecology and the rights of peasants, in carrying out its mission to take care of the earth, feed the world, conserve biodiversity and cool the planet, through its constant search for food sovereignty in Latin America.”

According to Dr. Clara Nicholls of Colombbia, President of the Association, “SOCLA for the time gave an award to social movement, in this case La Via Campesina, for its exemplar leadership and inspirational energy in the promotion of agroecology among millions of rural men, women and youth in Latin America.”

La Via Campesina was represented in the Congress by a delegation of more than 30 peasant men, women and youth from the Latin American Coordination of Rural Movements (CLOC-Via Campesina), who came from Argentina, Brazil, Chile, Colombia, Costa Rica, and Mexico, among other countries. They participated along with more than 1,500 professors, researchers and students of agroecology, representatives of social movements, and NGO staff. The CLOC/LVC delegates spoke in diverse plenaries and roundtables, gave two keynote addresses, and spoke in both the inaugural and closing sessions of the Congress.

In the inauguration, Marta Greco of the National Peasant and Indigenous Movement of Argentina (MNCI-CLOC/LVC), said that: “agroecology is a crosscutting axis that relates to food sovereignty and popular agrarian reform in our region. For us, it has political, economic, cultural and social dimensions. We are committed to processes of agroecological training in the entire continent. The transformation of the productive and energy matrices of agriculture requires our organizations.” Later she gave an overview talk about the peasant agroecology schools of MNCI in Argentina, during the roundtable on “Education and Agroecology.”

In his keynote address, Adalberto “Pardal” Martins of the Landless Workers Movement of Brazil (MST-Via Campesina), explained the context of peasant struggle against the overpowering 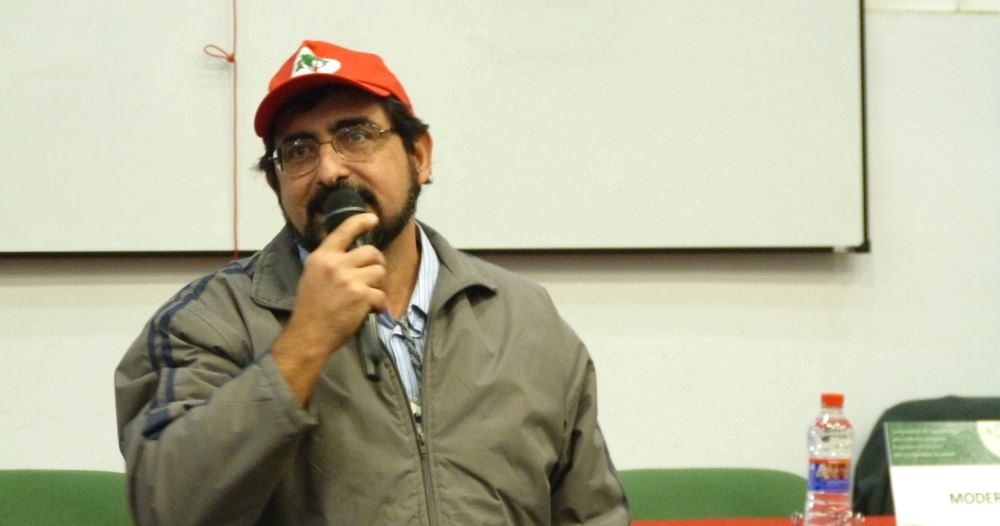 model of agribusiness, and emphasized that the objective of peasant agroecology is to transform and change the dominant agrifood system from the ground up. He said that: “agroecology is our peasant practice of resistance to agribusiness and the advance of capital.” He provided the examples of a network of women’s organic vegetable plots linked to a network of ecological farmer’s markets, a peasant cooperative/social enterprise that produces and sells organic seeds, Bionatur, and a “conglomerate” of peasant coops producing ecological rice, all in the South of Brazil.

Diego Montón, of the Continental Coordination of CLOC/Via Campesina, explained the struggle of La Via Campesina to gain official recognition for the rights of peasants in the United Nations, and the relationship between peasant agroecology and public policies.

José María Oviedo, of the National Farmers’ Union of Costa Rica, said in the closing ceremony of the Congress, that: “we peasant men and women are facing a war against the countryside,” that we are resisting and making transformations through agroecology, and that “in CLOC/Via Campesina we hope we can count on SOCLA in the future as an ally in this struggle.” In the roundtable on seeds, Carlos Opazo Bascunan, a peasant seed guardian from ANAMURI (Via Campesina-Chile), offered a magnificent vision of peasant seeds, their importance for agroecology and for humanity, and the threats they face.

In the roundtable on “Social Movements and Agroecology,” Angel Strapazón of MOCASE (Via Campesina-Argentina) shared a summary of the history of CLOC/Via Campesina, which he divided into 4 phases. He located the present explosion of peasant agroecology schools in the current phase.

In another keynote, Peter Rosset of the La Via Campesina International technical team and ECOSUR, said that today agroecology is at a crossroads. One view is that of peasant agroecology, food sovereignty and the Mother Earth, while the other is a technocratic, institutional vision, which sees agroecology only as a few more techniques to make industrial agriculture “just a tiny bit more sustainable,” “without addressing either structures of power nor monoculture,” through “false agroecologies” like “climate smart agriculture.”

In a document that CLOC/Via Campesina distributed to all the participants in the Congress (with support from the Argentinean Secretariat for Family Farm Agriculture), the CLOC/LVC explains that:

As women, men, elders and youth, peasants, indigenous people, landless laborers, pastoralists and other rural peoples, we are struggling to defend and to recover our land and territories to preserve our way of life, our communities, and our culture.  We are also defending and recovering our territories because the agroecological peasant agriculture we practice in them is a basic building block in the construction of food sovereignty and is the first line in our defense of the Mother Earth, ethical principles of life based on social justice and the dignity of our peoples. We are committed to producing food for people; the people of our communities, peoples and nations, rather than biomass for cellulose or agrofuels for exports to other countries. 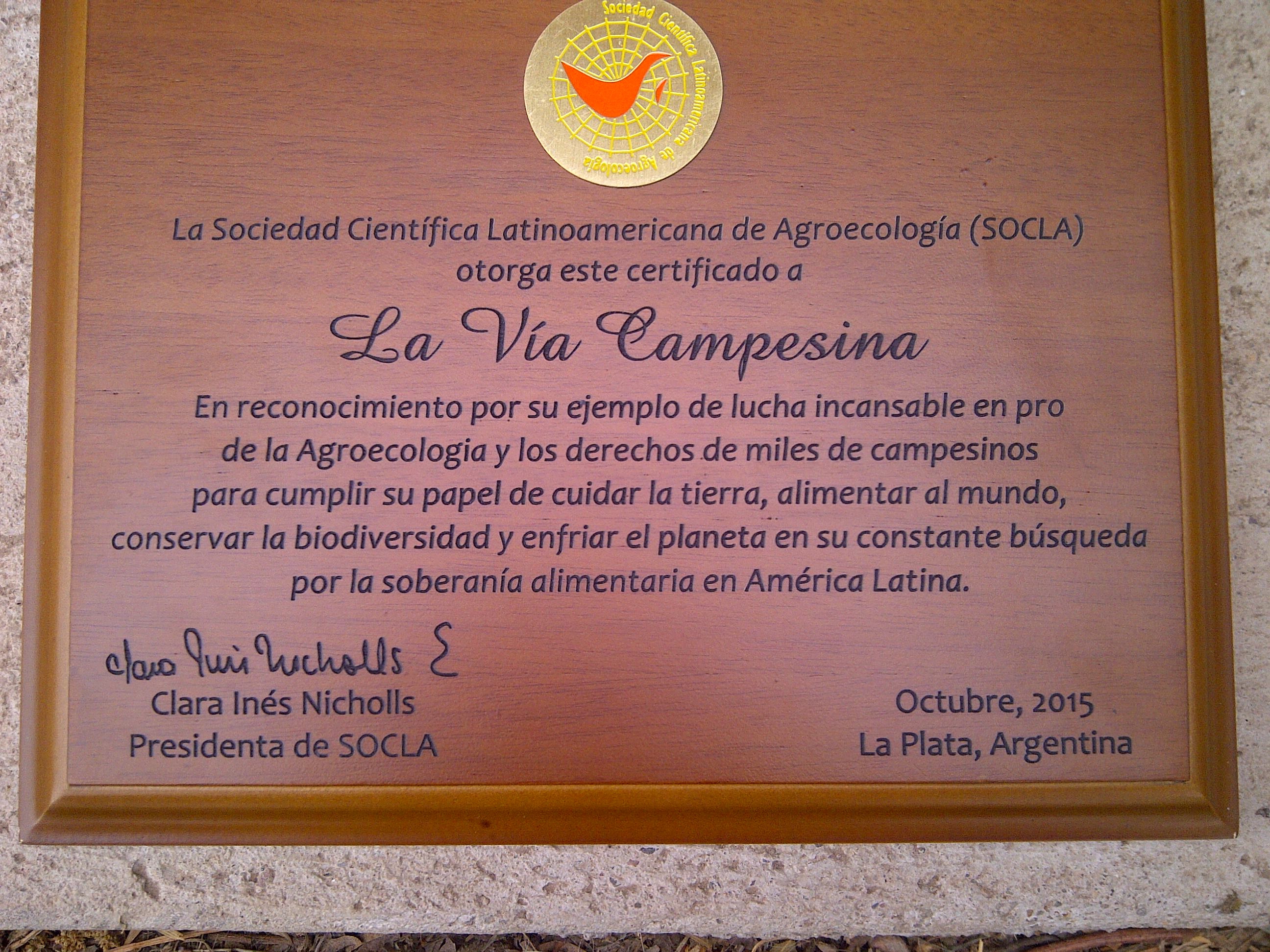 In La Via Campesina we stand for the “model of life,” of farms with farmers, of rural communities with families, of countrysides with trees and forests, mountains, lakes, rivers and coasts, and this model stands in stark contrast to the corporate “model of death,” of agriculture without farmers and families, of industrial monoculture, of rural areas without trees, of green deserts, and of wastelands poisoned with agrotoxics and GMOs.  We are actively confronting capital and agribusiness, disputing land and territory with them.

When we are in control of our territories we aim to put into practice peasant agroecology based on local systems of peasant seeds, which has been proven to be more beneficial to Mother Earth, as it helps to cool the planet, and has been demonstrated to be more productive per unit area than industrial monoculture, offering the potential to feed the world with healthy, wholesome, locally produced food, while guaranteeing us and future generations of rural peoples a decent life. Food sovereignty based on agroecological peasant farming offers solutions to the food and the climate crises, as well as to the other crises induced by capitalism that humanity is currently facing.