Home » ZIMSOFF co-organises a dialogue on the state of land, seeds and food with allies 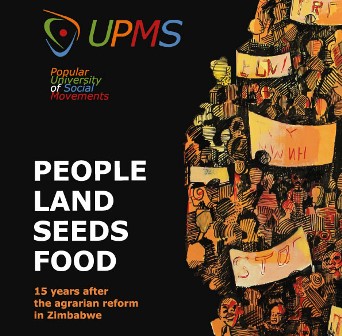 Popular University of Social Movements gathers in Harare: social movements and academics to dialogue on the state of land, seeds and food in SADC

(Harare, July 11, 2016) – Over the past 15 years, Zimbabwe’s fast track land reform programme has redressed colonial land inequalities and now provides lessons for its neighbours on how to democratise land ownership and broaden economic participation. From July 12-15, various social movements and academics from Zimbabwe, Mozambique, South Africa, Ghana, Spain and Portugal will gather in Zimbabwe’s capital, Harare to discuss and debate the state of land, seeds, food, climate and people in Southern Africa. The event is being held under the banner/auspices of Portugal’s Popular University of Social Movements, known by its Portuguese acronym, UPMS.

Social movements have powerfully influenced Zimbabwe’s land reform, and movements’ role in pressuring governments for land reform is today more important than ever. The Southern African region’s food deficit has risen in the past five years due to limited agricultural support by the state and climate linked weather vagaries. Land investments and changes to seed laws and the growing impacts of climate change are also shaping regional food security.

What can the rest of the region learn from Zimbabwe’s land reform process? How can we understand regional policies regarding land, seeds, food and water? What responses can we collectively push for to address the challenges facing Zimbabwe and the wider region on the issues of food, land, seeds, water and climate? These are some of the key points to be debated at this UPMS workshop.

Boaventura de Sousa Santos, director of the Centre for Social Studies, University of Coimbra, said, “This UPMS workshop brings together academics and leaders of peasants’ movements, women’s movements and housing movements to focus on land, seeds and food, one of the most urgent and important topics in a time of savage neoliberal capitalism, land grabbing, finance speculation on commodities and land.”

Building alliances among social movements is the only way to develop an effective resistance against such powerful interests, he added.

The Popular University of Social Movements’ workshops are designed to promote the sharing of knowledge born out of experiences of both academic research and struggles on the ground. It is a process of broadening, articulating and enhancing forms of struggle against neoliberal globalization, capitalism, colonialism, sexism and other relations of domination and oppression; a process of rethinking and renew knowledge for political and social struggles, and developing new paradigms of social transformation from the Global South.

According to Elizabeth Mpofu, chairperson of Zimbabwe Organic Smallholder Farmers Forum (ZIMSOFF),”This event is happening at the appropriate time. We are confronted by various social, economic and political challenges. It is the right time to sit down and analyze how far we have walked since 2000 and what is the reality in our neighboring countries.”

Thandiwe Chidavarume, from the Rural Women’s Assembly in Zimbabwe said, “Rural women farmers demand climate justice, participation in decision making and recognition of their immense contribution to food security and food sovereignty. This event provides a space to learn from and share with others experiences relevant to shaping solutions to these issues.”

Walter Chambati, deputy executive director of Sam Moyo African Institute of Agrarian Studies sees this workshop as a space that “presents an opportunity to reflect on Zimbabwe’s land reform successes and constraints. There can’t be a better platform for social movements from the global south to meet and share experiences on issues related to land, food and climate justice in the interests of promoting food sovereignty”.

The Harare UPMS workshop is co-hosted by Zimbabwe Organic Smallholder Farmers Forum, the Sam Moyo African Institute of Agrarian Studies, the Rural Women’s Assembly and the ALICE Project of the Centre for Social Studies.