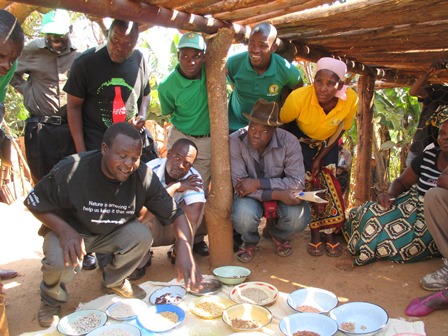 (Harare, May 10, 2016) Over the years, Zimbabwe Small Holder Organic Farmers’ Forum (ZIMSOFF) has been campaigning against proposed seed laws that are designed to criminalise farmer-saved seed production and exchange. These laws are pushed through economic and political blocs. Blocs initially designed with good intent but are being used to push through unbeneficial schemes by a few but powerful member countries to as many countries as possible, bypassing individual nation legal processes.

Last year 2015, ZIMSOFF and Uniao Provincial Dos Camponeses De Manica (UCAMA) an affiliate member of União Nacional de Camponeses (UNAC), joined hands to struggle for peasant seed systems and practically unite smallholder farmers across the borders of Zimbabwe and Mozambique so as to create opportunities for horizontal (farmer to farmer) learning and exchange of knowledge.

Commercial seeds require intense use of chemical fertilisers, other agro-chemicals and technologies that suffocate agro-diversity, soil and biodiversity (narrows diets, kills insects and many other beneficial microorganisms).

In September (20-23), 15 ZIMSOFF famers and 2 staff members visited Ucama in Manica Province of Mozambique. Then in October (4-7), 20 Ucama farmers visited the Eastern Cluster of ZIMSOFF in Manicaland Province of Zimbabwe. During these visits the farmers shared and exchanged seeds. They also witnessed the effects of the climate change induced drought. Most farmers planted a few crops as a precaution. In Mozambique maize was the predominant crop planted, other crops such as the small grains, groundnuts, roundnuts and cow peas were grown but in limited quantities. The farmers prioritised maize growing whose grain they exchange with farmers from other regions to get small grains.

Below are some stories shared by Ucama farmers on seed selection, preservation and storage.

Susan Mandara of Machipanda district: “I select my seed during harvesting by choosing the most firm cobs. Then I remove a few husks such that when l dry them under the sun, the heat is not directly onto the seed. I clean my granary and make sure it is clean; I use fine anthill soil mixed with water to make a paste and plaster the floor as well as the walls of my 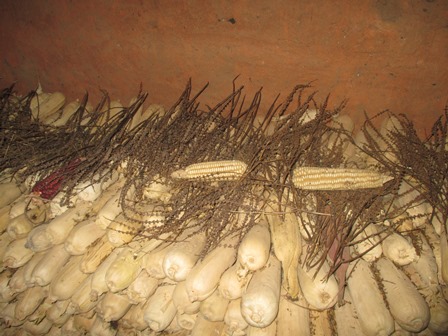 granary. I give it a week to dry up and l also inspect to see if there are no holes that can allow weevils to breed. When my granary is ready I collect a local weed called “nhuhwe nhuhwe”- our local language. I arrange a continuous layer on the floor and stack the cobs to a layer of 30 centimeters high and put “nhuwe nhuwe” again and repeat the process until about five to six layers of stacks and finally cover the last layer with the “nhuhwe nhuhwe”. “For small grains l use ash to preserve  them. I put ash and the small grains in a closed bottle, then mix by shaking and only open it on the planting day. I like traditional preservation because its cheaper, easy to handle, and the germination is good, so is the yield”.

Naume Francesco Joe, also from Machipanda district: “I prefer farming small grains. My favourite is pearl millet; l grow also ground nuts and round nuts. However because of weather changes and local myths I did not harvest much of the nuts.  I did not plant finger millet because our Chief banned the planting of the crop after his sister passed away, after eating porridge made from millet malt. I cannot plant it anymore because the Chief will fine or chase away anyone found going against his directive, from the village. What you see is the medium red groundnuts. After harvesting, I dry them for three to four weeks. Then I store them in sacks and start shelling them around the month of September. After shelling l select the good ones to keep as seed. I put ash and ground nuts in a bottle, close and shake it before storing in a dry place. I prefer using bottles because they don’t absorb moisture. The planting seasons for the small grains have changed now because the weather is unpredictable. I plant only when rain falls but l cannot expect much harvest since the rainfall patterns have changed a lot.”

Philipha Chinyoka also from Machipanda district: ” For presevation against weevils l use our traditional weeds and trees, dried kambanje and partially dried gumtree. I arrange a continuous layer on the floor and stack the cobs to a layer of 30 centimeters high and cover with a layer of weeds and repeat the process and cover the last layer. No weevils will attack our seed because the traditional weeds we use are so powerful.” 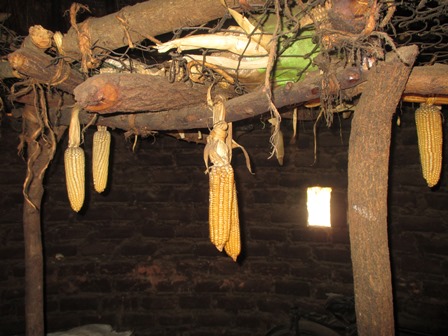 Marita Zhuwao also from Machipanda district: “I select my seed during harvesting by choosing the most firm cobs and remove a few husks. When I get home l open the husks and hang the cobs face down in the kitchen. I use the kitchen because the steam from firewood we use for cooking is a preservative on its own. No weevil will attack the seed. l will only remove them during the planting season.

Mr Senouri Domingo Shimaritene, the vice president of Gondola farmers Association in Gondola district built silos which can store one tonne of grain each. The silos were built of brick and mortar and plastered with mortar in and outside. He preserves the grain with local weed that he applies after every 30 centimetres of grain. The silos are sealed when full. He uses the opening at the bottom of the silos to get the required grain for consumption, after which seals it so that no weevils get into the silos.

The role of women in farmer seed systems is evident from the above cases as all but one were shared by women.