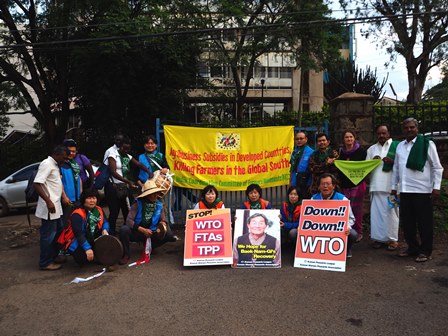 (Nairobi, December 17, 2015) Under capitalism production is not for consumption but for trade to make profits. Countries particularly the developing ones are being forced to open their borders and markets to cheap and low quality agricultural commodities from countries such as the US, China, EU, Brazil etc. All this is done to grow profits for big corporations. Everywhere WTO promotes dumping of heavily subsidised mass produced farm produce among other products from developed countries. Even countries such as South Korea and Kenya which produce adequate good quality rice and sugar respectively are forced take imports of these agricultural products.

According to Ha Won-Oh and Kim Soon-Ae, the delegates from the Korean Peasant League and Korean Women Peasants Association South Korea, because of rice imports, Korean farmers are being destroyed as imports cause low prices resulting in low incomes; the countryside is being deserted too. The youth are leaving the farms in search for better pay in urban areas. Elderly folk left on the farms. The debt owed by these farmers has doubled. Corporations such as Cargill stand to benefit as more farmers are destroyed in future. For now Korea has surplus rice. Cheap rice imports mean big foreign rice producers are being sustained while local producers are being destroyed.

The Kenyan situation is sad. Multinational corporations are stealing from the peasants and poor people. According to Cidi Otieno of Center for Constitution Implementation (CCI) Kenyan tea and coffee is being processed and packaged in Europe and imported to Kenya at higher prices. Yet the tea and coffee growers are paid very low prices which don’t allow subsistence. Farmers are being destroyed by cheap sugar imports from China. The sugar is first imported and repackaged in Uganda then sold to Kenya under the Common Market for Eastern and Southern Africa (COMESA), a regional trade bloc which allows free flow of goods for trade among member countries. The local sugar industry suffers too as it cannot compete against cheap sugar imports.

“Agricultural support from the Kenyan government is low. Where l come from sugar fields have not been harvested because the rail infrastructure has collapsed. The milling factories have been affected too. Some have closed. The government pays very low prices for the sugar. Farmers cannot send their children to school or pay for health” says Mary Saka of Bunge La Mwananchi. “Rice has been affected the same way too”, she added. 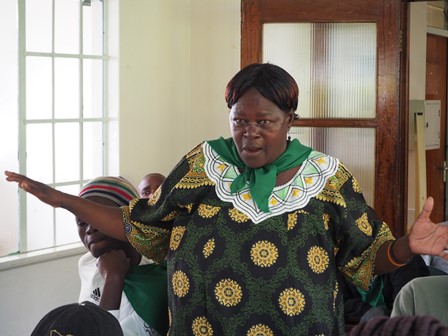 “Traditional cloth (Kikoyi-traditional cloth) and handcrafts (Kiondo – a local basket) and other locally made traditional instruments (Nyatiti –an 8 string instrument and Marimba) have been patented in Europe by private companies. With the WTO Trade Related Intellectual Property Rights (TRIPS), Kenya might soon pay royalties for producing these local goods in future. After the 10th WTO ministerial (MC10), Kenyan government could be forced to enforce patent laws under WTO as the foreign companies seek to control local production”, says Cidi Otieno.

WTO ministerial in Nairobi must fail to save the poor, peasants and small farmers from being turned into slaves to be exploited by corporations. Our governments must pull out of WTO now. We, the peasants and activists, gathered in Nairobi calling for an End the WTO should unite and collectively fight this vampire, the WTO.  Our future is better without the WTO. We call for Food Sovereignty to be embraced by our governments to support the poor and peasants.